Update Required To play the media you will need to either update your browser to a recent version or update your Flash plugin.
By Hai Do
16 March 2021


A European Union health official said Tuesday there was "no indication" that the AstraZeneca coronavirus vaccine caused blood clots in some people.

Emer Cooke, the head of the European Medicines Agency (EMA), spoke to reporters Tuesday. She said there was "no indication that vaccination has caused these conditions." The EMA director added, "While the investigation is ongoing, we are currently still firmly convinced that the benefits of the AstraZeneca vaccine in preventing Covid-19, with its associated risk of hospitalization, outweigh the risk of the side effects."

The statement came after Sweden and Latvia became the latest European countries to suspend use of the AstraZeneca vaccine. Anders Tegnell of the Swedish Public Health Agency said earlier on Tuesday, "The decision is a precautionary measure." He added Sweden would wait for the results of the European Medicines Agency's study.

Denmark, Iceland, and Norway were the first countries to temporarily stop using the vaccine. Ireland announced a similar decision over the weekend. On Monday, France, Germany, Spain and Italy were among the countries that suspended use of the vaccine.

Their decision came after reports of bleeding and blood clots among those who received the vaccine made by AstraZeneca with the University of Oxford. 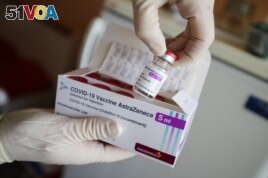 FILE - In this March 3, 2021 file photo ,a package of the AstraZeneca COVID-19 vaccine is shown in the state of Brandenburg where the first coronavirus vaccinations are given in doctors' surgeries, in Senftenberg, Germany.

AstraZeneca had said earlier that there is no evidence its vaccine carries an increased risk of blood clots. By March 8, there have been 37 reports of blood clots among the more than 17 million people who have received the vaccine across the EU and Britain, the company said.

Ann Taylor is AstraZeneca's Chief Medical Officer. She added: "the number of cases of blood clots reported in this group is lower than the hundreds of cases that would be expected among the general population."

Both the World Health Organization (WHO) and the European Medicines Agency (EMA) said they are studying the cases.

The AstraZeneca vaccine is one of three vaccines approved for emergency use in Europe. The other two are made by the companies Pfizer-BioNTech and Moderna.

In the United States, health officials have approved vaccines from Pfizer-BioNTech, Moderna and Johnson & Johnson for emergency use. AstraZeneca is planning to seek U.S. government approval in the coming months.

Vaccine for the world

When the AstraZeneca vaccine was approved for emergency use in Britain last December, the shot was described as the "vaccine for the world." The vaccine costs much less than those from Pfizer and Moderna. It also does not require extreme cold storage making it easier to use in countries with limited resources.

COVAX is an international program to deploy coronavirus vaccines to poor people around the world. Last month, the program sent its first supply of 600,000 shots made by AstraZeneca to the African country of Ghana. Others have gone to Nigeria, Kenya and the Asian countries of the Philippines and Indonesia. The program hopes to provide at least 2 billion shots, mainly from AstraZeneca, especially to poor countries around the world.

The largest user of AstraZeneca's vaccine, however, is India. The country is home to the Serum Institute of India where most of the AstraZeneca vaccine is manufactured.

Health officials reported that over 23.4 million people have received the AstraZeneca shot in India. That is out of 25.6 million people who have been vaccinated in that country. Health officials told the Press Trust of India news agency on Saturday that 234 cases of adverse events had been reported after receiving any vaccine. That number includes 71 deaths. However, they said there is no link to the vaccine. The government is now studying the cases for a final study.

In Thailand, Prime Minister Prayuth Chan-ocha received his first of the two-shot AstraZeneca vaccine. He said, "There are people who have concerns. But we must believe doctors, believe in our medical professionals."

indication –n. something that points out or shows

clot –n. a piece of dried blood that stops blood flow in part of the body

convinced –adj. to believe strongly in something