Update Required To play the media you will need to either update your browser to a recent version or update your Flash plugin.
By VOA
31 August, 2015


After the deaths of 71 migrants in a truck last week, the European Union will meet to discuss what is being called Europe's worst migrant crisis since World War II.

Hundreds of thousands of non-Europeans are taking huge risks to reach the continent. Many of the migrants have been welcomed. But many others face restrictions and even hostility.

British, French and German officials have called for urgent action to deal with the issue. The interior ministers of the three countries asked Luxembourg, the EU's current president, to call a meeting within two weeks. Luxembourg said it will open the talks on September 14 in Brussels in an effort to "strengthen the European response."

The three ministers also called for better processing of migrants in Italy and Greece. The International Organization for Migration says the two countries are the main landing points for the new arrivals. It says the largest populations arriving there came from Syria, Afghanistan, Eritrea and Nigeria. 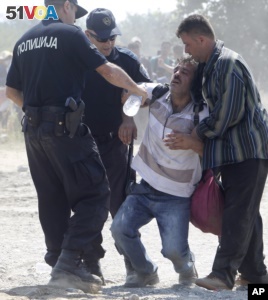 Macedonian police officers help a dehydrated migrant at the border from Greece to Macedonia, near southern Macedonian town of Gevgelija, on Monday, Aug. 31, 2015. (AP Photo/Boris Grdanoski)

The migrants are fleeing war, oppression and poverty. The International Organization for Migration says more than 322,000 migrants have crossed the Mediterranean Sea this year to reach Europe. More than 2,400 others drowned while attempting to cross the Mediterranean.

On Sunday, Pope Francis criticized the deaths of 71 migrants in a truck in Austria as an offense against "the entire human family." He called on world leaders "to cooperate with effectiveness to prevent these crimes."

Last Friday, United Nations Secretary-General Ban Ki-moon said he was "horrified and heartbroken" by the latest migrant deaths. In a statement, Mr. Ban said the conflicts and repression that force people to flee their homelands must be resolved.

Paul Power is head of the Refugee Council of Australia. He has this to say about the growing number of migrants.

"This problem, unfortunately, has been developing for years. It's obviously directly related to the crises in countries like Syria, the civil war that's occurring there, and the lack of effective international action to address that, but also the lack of effective international support for the countries in the frontline of refugee movements, such as Turkey, Lebanon, Jordan..."

Paul Power says it is not clear whether the migrants will need temporary or more permanent care. Many Syrians have fled the four-year long war in their homeland. Mr. Power says that, for them, the hope of a speedy end of the conflict remains unlikely.

This report was based on information from VOA's Victor Beattie and VOANews.com. George Grow adapted this story. Hai Do was the editor.

migrant – n. someone who goes from one place to another, mainly in search of work

response – n. an answer; something that is said or written in reaction to something else

unfortunately – adj. done in a regrettable or forgettable able way

frontline – n. border countries or the first line of defense