Update Required To play the media you will need to either update your browser to a recent version or update your Flash plugin.
By VOA
05 July, 2014

In its ruling, Europe's highest court rejected a petition, or request, from a young Muslim woman. She claimed that France's 2010 veil ban violated her rights and was a form of discrimination. The court in found the legislation did not violate the European Convention on Human Rights.

The French law bans most cloth used to cover the face, including the Islamic face veil, or niqab, and the Afghan-style burqa. French officials say the measure is important not only for security reasons. They say face-covering veils violate women's rights and France's indifference to religion and religious considerations.

Only a small minority of French Muslim women actually wear veils. The government estimates less than 2,000 of France's 5 or 6 million Muslims wear them. However, the ban has fueled debate. Some Muslims argue it unfairly places attention on them. 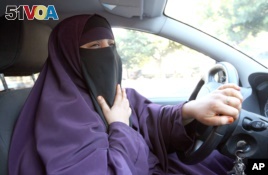 A woman wearing a niqab drives a car in Avignon, France before the government ban.

Dalil Boubakeur is head of the French Council of the Muslim Faith. He says face veils like the niqab are not a religious requirement.

Mr. Boubakeur says the word niqab is not described in Islam's holy book, the Koran, as a religious object. He has no problem with banning the covering. But he says other Muslims may disagree.

The rights group Amnesty International called the European court's ruling "deeply damaging." It says the decision represented, in its words, a "profound retreat on the right of freedom of expression and religion."

A researcher on extreme Islam at France's National Center for Scientific Research, Maryam Borghee, is also concerned. Ms. Borghee wrote a book about why young French women wear the veil. She says many do so voluntarily.

Ms. Borghee says she believes the ruling will deepen the division between more conservative European Muslims and public powers. She notes that conservative Muslims are a minority on the continent. And, she thinks the ruling will strengthen a larger sense among Muslims that they are being discriminated against because of their religion.

The European court's ruling may have wider influence. Belgium also placed a ban on veils. Some areas in Switzerland have done the same. In France, the ruling confirms a number of judicial decisions protecting the ban. Recently, France's highest court, the Court of Cassation, also supported the ban. I'm Mario Ritter.

*This report is based on a story from reporter Lisa Bryant in Paris.