Europeans Most Worried About IS, Divided on EU


Many people in Europe see Islamic State (IS) militants as the biggest threat to their nations, a Pew Research Center study finds.

Climate change is the second largest concern of Europeans. The arrival of refugees from Iraq and Syria in Europe is the third most important issue, the center says.

Researchers spoke with people living in 10 European countries. Only 17 percent of those questioned feel the self-declared Islamic State is a minor threat. Only 3 percent said the group is no threat at all to their nation.

Terrorist attacks in France and Belgium over the past year have put terrorism at the top of the list of concerns of Europeans. Security remains high across the continent since the attacks. 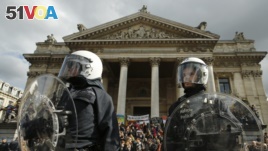 Police in riot gear protect one of the memorials to the victims of the recent Brussels attacks, as right wing demonstrators protest near the Place de la Bourse in Brussels, Sunday, March, 27, 2016.

Thirty-two people were in March when bombers attacked the airport and a train station in Brussels, the Belgian capital. The Islamic State said it carried out the attacks. The group also claimed responsibility for a series of deadly attacks in and around Paris last November. A total of 130 people were killed.

The new study found most Europeans do not feel that military spending should be increased. Many fear that increasing military force to fight terrorism only leads to more hate, which will increase violence, the Pew Center said.

The study also found that a majority of Europeans want the EU to become more active in world events. Close to 74 percent of Europeans think the EU should have more influence.

Even in Britain, 55 percent of respondents said the EU should take a more active international stance in the coming years. British voters will decide in a special election next week whether the country should continue as an EU member.

Other studies, including one released by the Pew Research Center last week, show that many Europeans may want to follow Britain's example and possibly leave the EU.

The staff at VOA News wrote this story. Jim Dresbach adapted it for Learning English and VOANews.com. George Grow was the editor.

Is there a future to the European Union? Is terrorism the biggest concern in Europe? We want to hear from you. Write to us in the Comments section or visit our 51VOA.COM.

respondent – n. someone who answers something, such as a public opinion survey