Update Required To play the media you will need to either update your browser to a recent version or update your Flash plugin.
By Hai Do
30 October 2022


Europe's energy crisis has forced some people to turn to less costly heating sources such as firewood.

But as demand increases, the public is facing rising prices, shortages and even reports of firewood theft. Foresters are using GPS devices to follow their logs while others fear the environmental impact of increased air pollution and tree cutting.

In Moldova, Tudor Popescu splits firewood that will heat his home in the capital of Chisinau. As the nights turn colder, the load of firewood has been growing higher around him — his supplies for the coming winter. 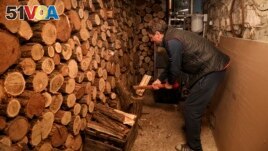 In the past, Popescu depended on natural gas for warmth in the mornings and firewood at night. But gas is now in short supply, following Russia's major cut to gas exports.

"I won't use gas anymore, so it's going to only be wood," Popescu said. "But what I have isn't enough."

The demand for firewood in Europe is not limited to poorer nations like Moldova. Germany, Poland and the Czech Republic's state-owned forests are seeing much stronger demand for the limited amounts of firewood they sell as part of their sustainable forest programs.

The German forestry service has reported getting requests for firewood from people who had never sought firewood before. The people seemed not to know that the firewood process takes two years. That is how long it takes to fully dry the wood so it will burn in wood stoves, said the forestry office in the southwestern state of Hesse.

State forests in the Czech Republic also report increased demand for firewood. The government sells the wood for use at home, only. Officials say they have had to limit the amount of firewood sold to individuals.

In Poland, demand for small firewood from state forests increased by 46 percent through the end of August from a year earlier. Larger firewood demand was up 42 percent. A spokesman for Poland's State Forests said, "small firewood is probably the cheapest heating material in the EU countries." He said theft of firewood is also on the rise.

To prevent theft in Germany, the forestry department is experimenting with hiding GPS devices in logs. The German state of North Rhine-Westphalia is the latest to try the technology. Foresters in neighboring Hesse have been using GPS devices since 2013 and say they have been able to solve several thefts that way.

Germany's statistics agency says prices for firewood and wood products used in home heating rose over 85 percent in August from a year earlier. Even so, heating with wood is still less costly than natural gas. Gas costs 20.9 cents per kilowatt hour of heat, while wood products cost 14.88 cents.

In Britain, prices of firewood also are going up. Company Certainly Wood says it has seen "a massive increase in demand" even though the price is 15 to 20 percent higher than last year.

At the same time, government officials and environmentalists have warned Danes about the risk of burning firewood. The smoke produced can be dangerous and adds to pollution, they say, and the tree loss adds to climate change problems.

Hai Do adapted this story for Learning English based on reporting from The Associated Press.

sustainable - adj. involving methods that do not completely use up or destroy resources