Update Required To play the media you will need to either update your browser to a recent version or update your Flash plugin.
By Dan Friedell
28 October 2022


A large European beekeeper group held its yearly meeting this week in France. The group said it is concerned about the effects of climate change, parasites and pesticides on both bees and the world food supply.

The beekeepers said bees are dying in large amounts. They also noted that bees are not producing as much honey as in the past.

The beekeepers said Europe only produces about 60 percent of the honey it consumes. Production in France, the group said, has fallen by more than 50 percent since the 1990s. 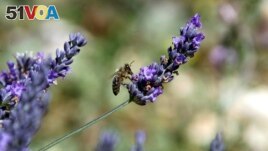 FILE - A bee gathers nectar of lavender from a field in Sederon, near Carpentras, southern France, Aug. 27, 2014. (AP Photo/Claude Paris)

The beekeeping group said its announcement about the bee situation in Europe gives beekeepers and scientists a chance to react to climate concerns.

The spokesperson for the National Union of French Beekeepers is Henri Clement. He is a beekeeper from southeastern France. He said he has been working as a beekeeper and trying to keep bees healthy for 30 years. However, if he had to consider a career for himself today, he said, he might not want to raise bees.

He is close to retirement and wonders if young people will take up the work.

The people at the event were all talking about chemicals known as pesticides, which hurt bees. They also discussed climate change and invasive insects and parasites that kill bees and harm beehives.

Jeff Pettis is an insect expert based in the United States. He is also president of Apimondia, a group that represents beekeepers in 110 countries. He said bees are at risk because of climate change. When some parts of the world are hotter and drier than in the past, the plants that bees depend on cannot grow. Sometimes, he said, "there are no flowers." Without flowers, bees cannot collect pollen, which means they can die of hunger.

Pettis wrote a report in the past about the plant called goldenrod, which produces a large amount of pollen. He wrote that, as the amount of carbon dioxide in the atmosphere grows, the amount of protein in pollen decreases.

Many of the bees in North America depend on goldenrod pollen to get through winter.

He said the pollen problem could affect other plants, too.

In both France and the United States, between 30 and 40 percent of beehives are dying each winter.

French researcher Jean-Marc Bonmatin said some pesticides hurt bees more than others. A kind of pesticide called a neonicotinoid is absorbed, or taken in, by the entire plant. Other pesticides only affect the part of the plant upon which they are applied. The neonicotinoids can affect the pollen and nectar that is taken in by the bees. The pesticides then poison the bees.

Beginning in 2013, the European Union restricted the use of some of these pesticides. The EU banned them fully in 2018. However, some countries are permitting farmers to use them again under "emergency authorizations."

Bonmatin said there is one thing that might help farmers make better choices. A newly developed computer program will permit them to find out if the pesticide they want to use is harmful to bees. The farmers will not have to pay for the computer program.

Pettis noted that there are ways people can help bees. He said farmers should start planting a wide range of crops, and not depend as much on crops that need pesticides. He called that kind of farming "sustainable" and "organic."

In addition, he said, bees can sometimes survive on their own without special help from humans. He talked about a black bee found in the northwestern part of France. The bee is still living even though it has been attacked by parasites and not given extra food by humans.

He said the bees "survive pretty well even without us."

Dan Friedell adapted this story for VOA Learning English based on a report by AFP.

pesticide –n. a chemical used to kill animals or insects that damage plants or crops

consume –v. to eat or drink something

invasive –adj. something that is not local that spreads in a new area

beehive –n. the place built by bees for them to live and store honey

pollen –n. the fine dust produced by a plant that is carried to other plants by wind or insects

apply –v. to put or spread something on a surface

sustainable –adj. able to be used without being completely used up or destroyed

organic –adj. food grown without the use of chemicals