Update Required To play the media you will need to either update your browser to a recent version or update your Flash plugin.
By Anne Ball
27 October, 2018


European and Japanese space agencies have successfully launched a spacecraft as part of a joint effort to study Mercury, the closest planet to the sun.

The unmanned "BepiColombo" spacecraft launched from French Guiana on October 20. It is named after the Italian scientist Giuseppe "Bepi" Colombo. The Ariane 5 rocket lifted it into orbit. The spacecraft carried two probes, one developed by the European Space Agency (ESA) and the other by Japan Aerospace Exploration Agency (JAXA).

The trip to Mercury will take seven years. Scientists hope the mission will give them more information about the planet's inside core, as well as possibly answer questions about how our solar system was formed.

ESA said the $1.5-billion mission is one of the most complex in its history. Mercury's nearness to the sun makes it an especially difficult planet to study. There is intense gravitational pull from the sun, as well as extreme solar radiation. And the planet has extreme temperatures. 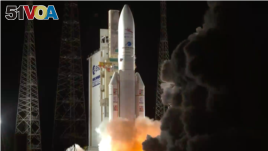 The BepiColombo spacecraft will have to follow an elliptical path to Mercury. Its trip includes one "fly-by" of Earth and two of Venus. It also will make six fly-bys of Mercury itself. This will let it slow down before arriving at its target in December 2025.

Once it arrives there, BepiColombo will release the two probes, called Bepi and Mio. The probes will independently investigate the surface and the magnetic field of Mercury. The probes are made to work in extreme temperatures -- from very hot to very cold. On the side facing the sun, the temperature is 430 degrees Celsius, but away from the sun, it is minus 180 degrees Celsius.

ESA's Bepi probe will operate in Mercury's inner orbit. JAXA's Mio will be in the outer orbit. Scientists hope the data gathered will give them information on the internal structure of the planet, its surface and physical development.

The scientists are building on the knowledge gained by the American space agency NASA's Messenger probe. It ended its mission in 2015 after a four-year orbit of Mercury. The only other spacecraft to visit Mercury was NASA's Mariner 10, which flew past the planet in the mid-1970s.

Mercury is not much bigger than Earth's moon. It has a huge iron core, about which little is known.

Guiseppe "Bepi" Colombo was an Italian professor, mathematician and engineer. Some call him the "Grandfather of the Fly-By" because his research helped in the exploration of Mercury, Saturn and Halley's Comet.

It is the second recent cooperation between the Europeans and the Japan Aerospace Exploration Agency. JAXA's Hayabusa2 probe dropped a German-French space vehicle on the asteroid Ryugu earlier this month.

Anne Ball wrote this story for Learning English based on an Associated Press report. Ashley Thompson was the editor.

probe - n. a device that is used to obtain information from outer space and send it back to Earth

core - n. the central part of something