Update Required To play the media you will need to either update your browser to a recent version or update your Flash plugin.
By Bryan Lynn
23 June 2022


European leaders have approved Ukraine as a candidate to join the European Union (EU).

Ukraine's application to become part of the EU was accepted during a meeting of EU leaders in Brussels Thursday.

The approval is a first step in considering Ukraine's full membership into the EU. The whole process is expected to take years. 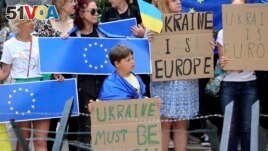 Protestors in support of Ukraine stand with signs and EU flags during a demonstration outside of an EU summit in Brussels, Thursday, June 23, 2022. (AP Photo/Olivier Matthys)

The EU's decision "is a signal to Moscow that Ukraine, and also other countries from the former Soviet Union, cannot belong to the Russian spheres of influence," Ukraine's ambassador to the EU, Vsevolod Chentsov, told Reuters.

Friday marks four months since Russian President Vladimir Putin sent troops across the border into Ukraine. Russia has called the war a "special military operation." Putin said the conflict was partly an answer to Western encroachment into what Russia considers its sphere of influence.

Russia has long opposed closer links between Ukraine and Western groupings like the EU and the NATO military alliance.

The West sees the war in Ukraine as an unjustified act of aggression by Russia. The conflict has killed thousands, displaced millions and destroyed cities. It has also affected world exports of goods such as food and energy.

Charles Michel is the European Council President. He called the approval of Ukraine's application "a decisive moment for the European Union."

Members of the European Parliament gave their approval to Ukraine's application hours before the EU meeting in Brussels. Legislators voted to pass a resolution that calls on EU heads of state and government to "move without delay" and "live up to their historical responsibility."

The EU's 27 nations have been united in backing Ukraine's resistance to Russia's invasion. They have approved a number of economic sanctions against Moscow.

But EU leaders were at first split on how quickly the group should move to accept Ukraine as a member. The nations with the biggest concerns were the Netherlands, Sweden and Denmark.

But Ukraine's application got a boost last week by the European Commission, which expressed its support after receiving answers from Ukraine from a series of questions sent in April and May.

Ukraine recently received additional support after the leaders of France, Germany, Italy and Romania visited the country and promised to back its candidacy.

Ukrainian President Volodymyr Zelenskyy said he spoke with 11 EU leaders on Wednesday, after holding calls with nine others the day before. He said the meeting in Brussels represents a "historic session of the European Council."

application – n. a formal and usually written request for something

sphere – n. a subject or area of knowledge, work, etc.

encroach – v. gradually take away someone's rights, power, etc. or get control of something, often without being noticed

decisive – adj. strongly affecting how a situation will progress or end

boost – n. something that makes you feel more confident or happy or that helps something increase of improve