Update Required To play the media you will need to either update your browser to a recent version or update your Flash plugin.
By Bryan Lynn
16 March, 2017


A Dutch political party known for its anti-Muslim statements has failed to win the most seats in parliamentary elections in the Netherlands.

The Party for Freedom, or PVV, led by Geert Wilders, won the second most seats in parliament. It was second behind the People's Party for Freedom and Democracy, or VVD, of Prime Minister Mark Rutte.

Recent opinion surveys had suggested Wilders' Party for Freedom might have had enough support to gain a plurality, or the most seats in parliament.

With most votes counted for the 150-seat legislature, the VVD had 33 seats. That is eight fewer seats than in the previous election in 2012. The Party for Freedom won 20 seats, gaining five since the last election. 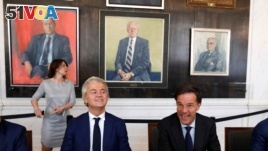 Dutch Prime Minister Mark Rutte (R) of the VVD Liberal party and Dutch far-right politician Geert Wilders of the PVV Party take part in a meeting at the Dutch Parliament after the general election in The Hague, Netherlands, March 16, 2017. REUTERS/Yves Herman

The results mean Prime Minister Rutte will begin talks with other parties to form a coalition government. Until now, he has rejected the possibility of working with Wilders and his Party for Freedom.

"Now we are the 2nd largest party," Wilders tweeted about the results. "Next time we will be number 1."

Wilders campaigned for strong limits on immigration. He also called for pulling the Netherlands out of the European Union and frequently spoke out against Muslims. He proposed shutting down mosques and banning the Koran across the country. The Koran is the Muslim holy book.

Other candidates have denounced Wilders' strong language against Muslims and immigration. However, most support policies that limit immigration in the Netherlands.

The results were seen as a setback for European populist movements that strengthened after a migrant crisis hit many countries.

Political observers believe a win for Wilders may have helped France's far-right presidential candidate Marine Le Pen. Her public support is nearly equal to more moderate candidate Emmanuel Macron before a first round of elections next month.

Macron said the voting in the Netherlands showed that "a breakthrough for the extreme right is not a foregone conclusion." He said he believes progressive candidates are now gaining momentum in Europe.

In Germany, Chancellor Angela Merkel's Christian Democratic Union party suffered a political setback in elections last year. The losses were blamed partly on her decision to accept more than one million refugees during Europe's migrant crisis.

Growing anti-immigrant feelings in Germany have fueled support for the anti-immigration Alternative for Germany party (AfD).

Merkel will seek re-election in September. She reacted to the Dutch elections by calling the outcome "a very pro-European result" and "a good day for democracy."

The head of the European Commission, Jean-Claude Juncker, said Dutch voters confirmed the importance of European values for "free and tolerant societies."

In a letter to the Dutch prime minister, Juncker said he looked forward to continuing good working relations, "in particular our work on the future of Europe."

Bryan Lynn wrote this story for VOA Learning English, based on material from the Associated Press and Reuters. Mario Ritter was the editor.

We want to hear from you. Do you think the Dutch election result sends a message about upcoming voting in other European nations? Write to us in the Comments section, and visit 51VOA.COM.

foregone – adj. something in the future that is sure to happen or be true

momentum – n. strength or force that allows something to continue or grow

tolerant – adj. able to accept feelings or beliefs that are different from your own