Update Required To play the media you will need to either update your browser to a recent version or update your Flash plugin.
By Dan Novak
18 June 2022

The data is being collected in an effort to create the most complete map yet of our galaxy.

The data was gathered from ESA's Gaia space observatory. 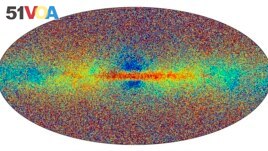 This all-sky view provided by European Space Agency on Monday, June 13, 2022 shows a sample of the Milky Way stars in Gaia's data release 3. The colour indicates the stellar metallicity. Redder stars are richer in metals. (ESA Handout via AP)

Astronomers hope to use the data to better understand how stars are born and die, and how the Milky Way has changed over billions of years.

The data includes new information like the age, size, temperature and chemical properties of stars. This information can be used, for example, to find out which stars were born in another galaxy and then moved to the Milky Way.

"This is an incredible gold mine for astronomy," said Antonella Vallenari. She helped lead a group of 450 scientists and engineers. They spent years turning the measurements collected by the space observatory into information that can be used.

Gaia was also able to find more than 100,000 starquakes. ESA compared starquakes to large tsunamis that go across stars. They appear to make the stars' brightness change for a very short period of time. The events let scientists measure the stars' density, interior rotation and inside temperature, said astrophysicist Conny Aerts.

The scientists have only collected information on about one percent of the Milky Way's stars. But the Gaia mission is already providing enough information for about 1,600 scientific publications a year.

"You have to observe a lot of objects in order to get the needle in the haystack," he said.

Josef Aschbacher is head of ESA. He said the new data permits astronomers to understand forces in the galaxy. For example, it could show how our own solar system is moving inside the Milky Way.

"It is enabling things that would never be possible without this large number of data," he said.

The Gaia data now being released also includes information on 800,000 binary stars, which are stars in orbit around another star. There is also data on several new planets outside the Solar System, hundreds of thousands of asteroids in the Solar System and millions of objects beyond our galaxy.

rotation — n. the motion of turning around a central point

enable — v. to make something possible or able to be done