Europe's Roma Do Not Have Equal Education

Update Required To play the media you will need to either update your browser to a recent version or update your Flash plugin.
By Alice Bryant
21 November, 2017

Official reports say the group, also known as Romani people, has up to 12 million members in Europe.

The Roma are among Europe's most disadvantaged populations. Across the continent, a high number of Roma experience social exclusion. They are often treated differently from other Europeans in the workplace, in housing and education.

In several countries, Roma children attend the poorest schools or face discrimination in schools where they are the minority. Some children are unfairly sent to "special education" centers for students with learning difficulties.

In other cases, the children may be denied access to education because they lack documentation. Or they are simply unable to attend classes because they live far from the nearest school. 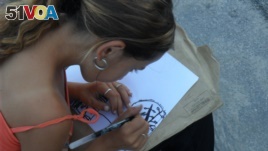 Radost Zaharieva says that Romani girls are thirsty for knowledge despite all of the barriers that they face in access to education in France.

As a result, Roma communities often suffer from low levels of education. International experts say this has created a form of inter-generational poverty.

Throughout Europe, Roma children have lower school registration and attendance rates and higher dropout rates than the general population.

In central and southeastern Europe, only about 20 percent of the children complete primary school compared to 90 percent of non-Roma youngsters. And a 2012 study of 11 European Union, or EU nations found that only 15 percent of Roma children finish upper-secondary school or job-related training.

Nora Shabani is an education specialist for UNICEF -- the United Nations International Children's Emergency Fund. She told VOA that many Roma children have a number of needs, and school access alone is only one.

"They lack food. They lack clothing. They lack documents. They have problems with the language of instruction, and these needs really require engagement from many partners and service providers."

In addition, experts say, Roma children face discrimination and even racism in some schools, one reason they leave school at a higher rate than non-Roma children. Language, too, is a barrier. And, some stop attending classes to help the family earn money, take care of the home, or because they are expected to marry.

Realities of Roma life in Europe

Even with these realities, Romani people are not a homogenous group. A growing Roma middle class exists. Some Roma communities have remained settled in parts of Europe for hundreds of years, while other Roma are more nomadic.

The ancestors of modern Roma came from Northern India. They migrated to the continent about 1,000 years ago.

Most live in central and eastern Europe, but for centuries, smaller communities of Romani have existed in Western Europe. In recent years, more Roma have been moving to Britain, France and other countries in search of a better life.

For a long time, Roma have been the subject of myths about their culture, like that they prefer stealing or asking for money from strangers to working hard.

Today, fewer than 1 in 3 Roma in 11 EU countries have a job, and 90 percent live in poverty. In central and southeastern Europe, Roma unemployment rates are more than five times that of the general population.

But extreme poverty was not always the case.

A European Commission report notes that, for years, Roma were well-established in rural areas. They worked mainly in trade occupations, such as blacksmithing and craftsmanship, or as musicians.

But industrialization, the end of communist rule in Eastern Europe, and the Balkan wars of the 1990s combined to cause intense hardship for Roma.

Six million Roma live in the European Union, and most are EU citizens, which means they have the right to live in any EU member country. Yet many people in Western Europe often think of Roma as foreigners or outsiders. Indeed, a number of European leaders speak openly of the "Roma problem" and ways to slow their migration.

In Western Europe, many Roma migrants live in informal camps. They have little access to running water and waste removal systems.

In France, for example, between 15,000 and 20,000 Roma live in informal camps and face threats of eviction. And, two-thirds of the children rarely go to school or do not attend at all.

Radost Zaharieva is from the European Roma Rights Centre (ERRC) – a public interest law group. She is the country representative for France. 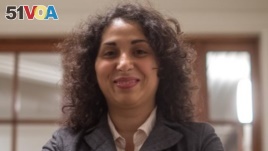 Radost Zaharieva is with the European Roma Rights Centre (ERRC) – a public interest law group. Zaharieva is the country representative for France.

Zaharieva says that access to education for Roma children in France is tied to their housing.

"These families face repeated forced evictions, some of them many times per year, which is a real barrier for them to settle in one place and to have the needed time for doing every administrative procedure to get access (to) their rights."

Most French cities require a residency permit for school enrollment. Some non-governmental organizations and community centers do provide families with mailing addresses. But it is each city's mayor who decides whether to accept them.

Evictions from camps are also common for Roma in Italy.

Rosa Mangiacavallo is the Italian representative to the ERRC. In an email, she noted children in informal camps there can enroll in school but said the evictions prevent enrollment and regular attendance. In addition, she said, the camps are often set up in industrial areas, far from schools.

In a 2016 statement, the Council of Europe, the United Nations and other agencies warned European officials that they are required to offer housing options to homeless individuals. They also said that continued evictions prevent Roma children from accessing education and healthcare.

For the majority of children in non-EU member countries, there are three fairly common situations: poorly financed schools where most students are Roma; schools where Roma are the minority; and special education centers for children with learning disabilities.

In areas where most students are Roma, UNICEF's Nora Shabani notes, the schools are overcrowded, buildings are in poor condition, and teacher quality is low.

In schools where Roma children are the minority, she says, they can face discrimination from administrators, teachers and students. They often are sent to separate classes or kept separate from other children within the classroom.

The Open Society Institute found that negative beliefs about the academic ability of Roma children are common throughout Central and Eastern Europe.

"Very often, because of discrimination, Roma children are not accepted and, even worse, they often have to go (take) entry tests and during these tests, they are often given qualification (the result) as they are not eligible to attend regular education and they are directed toward 'special' schools."

The system of sending Romani children to special education schools is now being fought in courts throughout Europe.

A 2011 study by Central European University and Hungarian Academy of Sciences looked at reading and mathematics tests. The study found that the achievement gap between Roma and non-Roma children is the result of social disadvantages, such as poverty and the parents' lack of access to the labor market.

Between 2005 and 2015, a 12-country program called the Decade of Roma Inclusion sought to address social inclusion and the socio-economic condition of the Roma. Shabani says that the Roma Decade was successful in increasing access to school for Roma children. But, she notes, access alone does not keep children in school.

She says early childhood education will address most of the social and economic disadvantages Roma children face. Both UNICEF and the World Bank note that access to preschool would lower the chances of Roma children being sent to "special" schools and increase their chances of completing secondary schools.

Beyond grade school, non-governmental organizations such as the Roma Education Fund offer a number of university scholarships to Roma students. In addition, some European universities now have admissions policies designed to support Roma student. Others offer programs that help the students prepare for college.

disadvantage - n. something that makes someone or something worse or less likely to succeed than others

access - n. a way of being able to get or use something

primary school - adj. a school in which children receive primary education, usually between ages 5-12, coming after pre-school and before secondary education

homogeneous - adj. made up of the same kind of people or things

nomadic - adj. a member of a group of people who move from place to place instead of living in one place all the time

myth - n. an idea or story that is believed by many people but that is not true

eviction - n. the act of forcing someone to leave a place

procedure - n. a series of actions that are done in a certain way or order

enrollment - n. the act of registering a child for school