Even with Recent Problems, College Rankings Likely to Remain

Update Required To play the media you will need to either update your browser to a recent version or update your Flash plugin.
By Dan Friedell
07 January 2023


Students and college advisors agree that there are problems with a popular college ranking system in the United States. The magazine U.S. News and World Report produces the rankings.

At the same time, the critics do not believe the rankings will end anytime soon.

The list of recent problems related to college rankings is a long one. 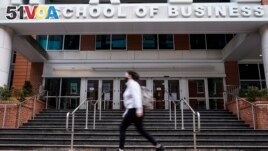 FILE - The Fox School of Business is shown on the Temple University campus in Philadelphia on Friday, April 16, 2021. (AP Photo/Matt Rourke)

At the start of 2022, Moshe Porat, former leader of the business school at Temple University in Philadelphia, was sentenced to 14 months in prison. A court had found him guilty of giving false information to U.S. News and World Report that raised his school's ranking. He was also ordered to pay a large financial penalty.

Over the summer, Columbia University professor Michael Thaddeus said he believed some of the data the university sent to the magazine were incorrect. As a result, the university held back its numbers and was not included in U.S. News and World Report's 2023 rankings. The publication also removed Columbia from past lists.

Law schools back out

And finally, in autumn, a number of top law schools protested the rankings. They restricted some information they sent to the magazine. The protesting schools included Yale, Stanford, Harvard and the University of California – Berkeley.

In all, nine of the top 14 law schools ranked by U.S. News and World Report joined the protest.

Heather Gerken is the head of Yale's law school. She called the magazine's product -- ranking schools -- "nearly impossible." She noted that all law schools are different and a "one-size-fits-all" system "cannot provide an accurate picture."

In early 2023, U.S. News and World Report answered the criticism. The magazine said it would change its system. The rankings would not penalize schools whose graduates moved on to advanced degree programs or important, but low-paying, jobs in public service. In addition, the magazine said it would no longer center so much of its final number on the opinions of law professors, lawyers and judges.

The law schools, however, continued to say they would not cooperate.

Heading into 2023, some schools, such as Columbia, will be unranked. Other schools are reconsidering their involvement with rankings. One expert, however, said rankings are still an important way for students to get extra information about colleges.

Allen Koh is the chief executive at Cardinal Education, a company in Northern California that helps students think about colleges and prepare their applications.

He said he does not think the protest will affect the reputations of law schools at Yale or Harvard. In addition, he said it is unlikely universities will stop their participation in the rankings.

In fact, Koh said he thinks universities will continue to try to get good rankings even though "everybody understands rankings are imperfect." He noted that rankings are especially important for international students who cannot visit colleges before deciding to attend.

"Your ranking – A – helps attract talent. B – instills pride for people who have already graduated. The better ranking you have, everyone who's already gone there, their degrees are getting more valuable."

Koh pointed out that a school's ability to raise money improves as its ranking improves, which permits it to open new buildings and create more programs. He called it a "virtuous cycle."

Sarju Poudel of Nepal recently finished his mechanical engineering degree from the University of Texas-Tyler. Tyler is a city in the eastern part of the state, not far from Louisiana.

Poudel said the process of choosing a college in the U.S. was "overwhelming." But, he said he never considered just a college's rankings. He wanted to make sure he received full financial aid at a school that supported computer science, physics and engineering.

"As long as the programs and university was regionally accredited, it passed my criteria for consideration," he said.

Now that he has graduated from college in the U.S., Poudel said he thinks higher-ranked schools can sometimes provide better possibilities for their students. For example, "high-ranking colleges may indicate availability of more funds, and (therefore) more research and project opportunities."

Still, when he gives advice to students from Nepal, he said he tells them to ignore rankings. He pushes them to explore "their programs, professors' backgrounds, projects and events related to their program and availability of internships."

Kartik Sundaram of India is finishing an advanced degree at the University of Michigan. The first thing he did when thinking about colleges was look up rankings, "just like I would if I was looking to buy a laptop."

The rankings, he said, were good because they gave him a starting point for his research. From there, he could look for more details, such as how often students graduate in four years. "Because I did not want to pay for a fifth year," he said.

His advice for international students considering universities to attend?

"Don't sweat [the rankings] too much," he said, adding, "No matter how much research you do, it's unlikely you'll even get close to half of the whole picture."

rank –v. to put a group of things in order, usually from best to worst

advanced degree –n. a level of education that comes after a bachelor's degree in the U.S.

application –n. a document one fills out in order to be considered for a job or a place at a school

participation –n. involvement in an activity

hyper-elite –adj. one of the very best

instill –v. to fill with something

overwhelming –adj. a feeling when something is difficult or hard to manage

accredited –adj. something that has official approval

indicate –v. to give a signal