Are You Progressing with Progressive Tenses?

Update Required To play the media you will need to either update your browser to a recent version or update your Flash plugin.
By Adam Brock
07 January, 2016


Editors note: This is the second of a four-part series on verb tenses. Click here to see part one.

For VOA Learning English, this is Everyday Grammar. 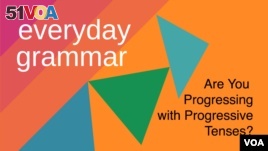 Are You Progressing with Progressive Tenses?

It is easy to confuse the simple present and the present progressive. What's the difference between, "It rains in Seattle" and "It is raining in Seattle"?

"It rains in Seattle" states that it rains in general. It does not necessarily mean that it is raining at the moment of speaking. "It is raining in Seattle" means that the rain started in the past, is happening now, and will probably continue into the future.

Now, at this time, and currently are common adverbs in the present progressive.

The meaning here is the same as the sentence in the simple future: "She is going to start school next semester." The present progressive and simple future (with be going to) sometimes have the same .

You can also use present progressive with always to say that something disturbs you. "My neighbor is always playing loud music at night" or "I am always making mistakes with verb tenses!"

Sentences in the past progressive often have two actions.

For example, "It was snowing when the plane landed in Denver."
Notice that the second action, landed, is in the simple past.

The past progressive can also express an action in progress interrupted by a second action. "I was running when I slipped and fell" or "I was sleeping when you called."

It is possible to have two progressive actions in the same sentence if the two actions are happening at the same time. You could say, "I was sleeping when you were working".

The future progressive can be useful when you are making plans. Imagine your friend wants you to pick her up the airport tomorrow. But you have to work.

You could tell her, "I'm sorry, but I will be working when your plane gets in."

There are some verbs that cannot be used in any of the progressive tenses. You would say "I own a car," not "I am owning a car." Own is a stative verb. Stative verbs describe unchanging conditions or situations. Stative verbs often refer to mental states such as know, realize, like, believe, understand, love, hate, appear, and exist.

A few verbs have both stative and non-stative meanings. Let's look at the verb think. "I think the book is good" is stative. The action does not change. "I am thinking about you" is progressive. It shows a temporary, changing action. Sensory verbs like see, taste, feel, smell, and hear work the in the same way.

Progressive verbs are especially useful for describing changing emotional states. For that reason, they are very common in song lyrics. We will leave you with a few examples.

"I was dreaming of the past
And my heart was beating fast
I began to lose control..."

"I'm sailing away
Sail an open course for the virgin sea"

Adam Brock wrote this story for Learning English. Jill Robbins and Kathleen Struck were the editors.

stative - adj. describes verbs that express a state rather than an action; usually relating to thoughts, emotions, relationships, senses, states of being and measurements

sensory – adj. of or relating to your physical senses