Update Required To play the media you will need to either update your browser to a recent version or update your Flash plugin.
By Ashley Thompson
05 May, 2016

This week, we are looking at more commonly confused words in the English language. Today's subject is homophones.

Homophones are two or more words that sound alike, but have different meanings or spellings. 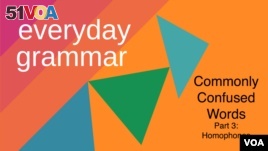 But other homophones are difficult, even for native English speakers.

One set of commonly confused homophones are the words bear and bare.

Let's start with bear [b-e-a-r.] Of course, as a noun, a bear is a large, heavy animal with thick hair and sharp claws.

But the word bear [b-e-a-r] can also be a verb. It can mean "to accept or get through something," usually something difficult.

The verb bear is often used with the modal verb can and a negation. Using this structure, "cannot bear" sometimes means "strongly dislike." If you travel to a very cold place in the middle of winter, you might say, "I cannot bear the cold weather."

Bear can also mean "to assume or accept something, such as a cost or responsibility." For example, "The man must bear full responsibility for his actions."

Bear can also sometimes mean "to carry." For example, Americans often talk about the "right to bear arms," or the right of citizens to possess a gun.

Sometimes, people make jokes about this expression. They replace the meaning of bear in this example with its meaning as a noun. The phrase then means that people have a right to possess a bear's arm.

Now let's turn to the word bare [b-a-r-e]. Bare is mostly used as an adjective. It means "not having a covering" or "not covered by clothing, shoes or something else."

If you just moved to a new home, the walls could still be bare. And, if you take your shoes and socks off before entering a room, you will have bare feet.

As a verb, bare [b-a-r-e] is similar to its adjectival meaning. To bare means "to remove the covering from something." It can also mean "to show or expose." For example, an angry animal might bare its teeth. The past tense of bare [b-a-r-e] is bared [b-a-r-e-d].

Next, we turn to three more homophones: sight, site and cite. All three words sound exactly the same.

Sight [s-i-g-h-t] means one of your five senses. As a noun, it is "the ability to see." Sight can also mean "someone or something that is seen." For example, "The sunset last night was a beautiful sight."

Another meaning of sight is "a famous or interesting place in an area." If you take a trip to the United States, a tour guide might show you all the sights in New York City or Washington, DC.

Site has a few other meanings. It is also short for website.

The third homophone, cite [c-i-t-e], is a verb. It can mean "to write or say the words" of a person, book or another source. It can also mean "to mention something," usually to support an idea or opinion. When you write research papers in school, for example, you cite other sources to support your argument.

So, if you ever have a disagreement with a friend about the English language, you can always cite (with a "c") Everyday Grammar by visiting our site (with an "s").

Join us next week as we discuss more commonly confused homophones!

homophone - n. a word that is pronounced like another word but is different in meaning, origin, or spelling

negation - n. a word or phrase made negative

expose - v. to reveal something