Double Negatives - Can’t Get None?

Update Required To play the media you will need to either update your browser to a recent version or update your Flash plugin.
By Adam Brock
01 May, 2015


In this week's episode of Everyday Grammar, we're going to talk about two common types of double negatives. A double negative is when you use two negative words in the same clause of a sentence.

"America wants to resolve this issue through diplomacy, and we believe that there is still time and space to do so. But that time is not unlimited."

What did the president mean when he said "not unlimited?" Mr. Obama's double negative statement confused many people. 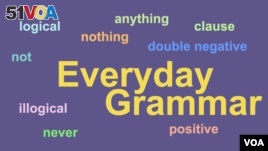 English teachers do not like double negatives because they can be confusing and illogical. Starting in elementary school, teachers tell students to avoid them. But many native English speakers still use double negatives.

There are two types of double negatives.

The first kind of double negative is when two negative words form a positive statement. When President Obama said, "Time is not unlimited," the negative "not" and the negative prefix "un" cancel each other out. What Mr. Obama meant is that time is limited for Iran. Politicians, lawyers, and diplomats sometimes use this type of double negative in sensitive situations. 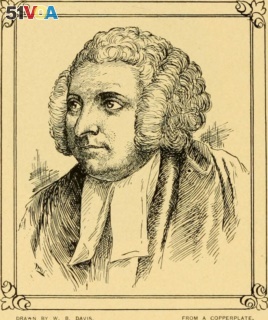 It was Robert Lowth who decided the double negative had no place in English grammar. Robert Lowth was a leader in the Church of England. In 1762, he wrote a book called A Short Introduction to English Grammar. Mr. Lowth proposed many restrictions on English grammar, many of them inspired by Latin. Over the years, his rules became the standard for teaching grammar all over the English-speaking world.

"I can't get no satisfaction

I can't get no satisfaction

Would the song have the same effect if Rolling Stones singer Mick Jagger had said, "I cannot get any satisfaction"?

And surely Robert Lowth would not approve of pop star Rihanna's use of the double negative in her song called "Numb".

"I don't care, can't tell me nothing"

The double negative is just one example of the difference between how English is taught in school and how it is sometimes spoken.

So next time you get frustrated with English grammar, don't blame your teacher. Blame Robert Lowth.

Adam Brock wrote and produced this story for VOA Learning English. Ashley Thompson was the editor.

She is not incorrect. (She IS correct)

The plan is not without risk. (The plan HAS risk)

Time is not unlimited. (Time IS limited)

TIP: This type of negative is grammatically acceptable, but should be avoided. It is used when the speakers want to be indirect and avoid offending someone.

TIP: This type of double negative is sometimes used in informal spoken English. One should avoid using it in academic and professional situations—especially in TOEFL, IELTS, college or job application letters.

double negative – n. a grammatical construction in which two negative words are used in the same clause to express a single negation.

illogical – adj. not showing good judgment : not thinking about things in a reasonable or sensible way : not logical

taboo – n. not acceptable to do

propose – v. to suggest (something, such as a plan or theory) to a person or group of people to consider

inspire – v. having a particular cause or influence

informal – adj. relaxed in tone : not suited for serious or official speech and writing