Update Required To play the media you will need to either update your browser to a recent version or update your Flash plugin.
By VOA
28 August, 2015

Let's start with will. To form the simple future, use will and then the simple form of the verb. For example, "I will go to the store." In everyday conversation, will often gets shortened, which can be difficult for English learners to hear. For example, "I'll leave tomorrow" or "He'll go to the store." You can use will to express a desire to do something. "I'll help you move tomorrow" or "I'll answer the phone." 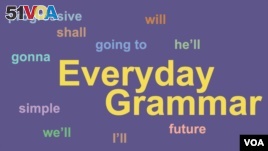 In casual conversation, most Americans will change going to to gonna. Listen for gonna in this song by rock band Twisted Sister.

Be careful with this expression. You might want to avoid using the reduced form, gonna, in formal situations. You should never use it in professional or academic writing.

"When I landed on your soil, I said to the people of the Philippines whence I came, ‘I shall return.'"

"I shall return" is one of the most famous quotes related to World War II.

But these days, shall seems very formal and a bit old-fashioned in American English. It is more common in British English.

If you are referring to a fixed schedule or timetable, you can even use the simple present to express the future. For example, "The flight to Chicago arrives at 7:00." The simple present here shows that the flight has a regular set schedule.

Listen to the future progressive in this popular love song by Richard Marx.

Wherever you go, whatever you do

I will be right here waiting for you

There is quite a bit of flexibility with future tenses; sometimes there is little or no difference among different forms. If you have a choice, use the simplest tense.

We'll leave you a song of hope about the future by Bob Dylan. Listen to the variety of future tenses he uses in "When the Ship Comes In."

The fishes will laugh as they swim out of the path

And the seagulls they'll be a-smiling

And rocks on the sand they will proudly stand

The hour that the ship comes in

Will not be understood as the spoken

And be buried on the bottom of the ocean

Adam Brock wrote this story for Learning English. Jill Robbins was the editor.

prediction - n. a statement about what will happen or might happen in the future

present progressive - gramm. The verb tense that indicates continuing action, something going on now. This tense is formed with the helping "to be" verb, in the present tense, plus the present participle of the verb (with an -ing ending)

simple present - gramm. The form of the verb that is usually the same as the base form, but the third person singular adds -s. Some verbs change, like 'to be', which uses 'am', 'are' and 'is', and 'to have', where the third person is 'has'. The auxiliary verb 'to do' is used in a negative structure or a question

future progressive - gramm. The verb tense expressing continuing action, something that will be happening, going on, at some point in the future. This tense is formed with the modal "will" plus "be," plus the present participle of the verb (with an -ing ending)