Welcome to another episode of Everyday Grammar on VOA Learning English.

English learners have difficulty with gerunds and infinitives. A gerund is the –ing form of a verb that functions the same as a noun. For example, "Running is fun." In this sentence, "running" is the gerund. It acts just like a noun.

The infinitive form of a verb appears either as the basic form (with no marking) or with the word "to." For example, you can say "I might run to the store" or "I like to run." In this sentence, "to run" is the infinitive. 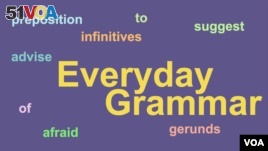 It is difficult for English learners to know whether to use a gerund or an infinitive after a verb.

Here's an example. Which sentence is correct?

Sentence one: I suggested going to dinner.

Sentence two: I suggested to go to dinner.

Sentence one, with the gerund, is correct. "I suggested going to dinner." Why? You can only use a gerund after the verb "suggest."

Let's take the word "like." You can say "I like" running" or "I like to run." Both sentences have the same meaning. You can use either a gerund or an infinitive after "like." Now let's try "enjoy." We can say, "I enjoy running." But we cannot say, "I enjoy to run." Why? Only a gerund can follow the verb "enjoy."

Are you confused yet? You're not alone. Gerund and infinitives confuse even very advanced English learners.

Here are a few tips.

Tip number two: When you are talking about an activity, you usually use a gerund. For example, "I stopped smoking." You can describe many activities by using "go" before a gerund. "Let's go shopping," or "We went skiing."

Let's see how much you know. Try to complete these sentences using the verb "study." Ready? I'll read the first part of the sentence and you finish it.

This is only a simple introduction to a complicated grammar topic.

Below is a helpful reference list for using gerunds and infinitives.

gerund - n. an English noun formed from a verb by adding -ing

infinitive - n. the basic form of a verb; usually used with to except with modal verbs like should and could and certain other verbs like see and hear

preposition - n. a word or group of words that is used with a noun, pronoun, or noun phrase to show direction, location, or time, or to introduce an object

Now it's your turn. In the comment section, write one sentence that uses a verb followed by a gerund or an infinitive. We'll respond with feedback about your usage.

admit, advise, avoid, be used to, can't help, can't stand, consider, deny, discuss, dislike, end up, enjoy, feel like, finish, forget, get used to, give up, go on, have difficulty, have problems, have trouble, imagine, it's no use, it's worthwhile, keep, look forward to, mention, mind, miss, recommend, remember, quit, spend time, stop, suggest, understand, waste time, work at

Either a gerund or an infinitive can follow these verbs, and there is no change in meaning

Either a gerund or an infinitive can follow these verbs, but the meaning may change:

A noun or pronoun and an infinitive follow these verbs