Update Required To play the media you will need to either update your browser to a recent version or update your Flash plugin.
By VOA
22 May, 2015


In this week's episode of Everyday Grammar, we are going to talk about conditionals. We use conditionals to show that something is true only when something else is true. Conditionals offer endless possibilities for creative and imaginative expression.

The present real conditional is the most basic kind of conditional. Basically, when A happens, B happens.

Here's an example of a present real conditional:

"If it rains, I bring an umbrella."

Poets and songwriters often use conditionals in their work. Listen for the present real conditional in this song by American songwriter Bob Dylan. 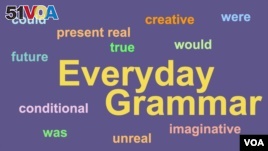 "If you see her, say hello

Notice that the verbs see and say are both in the present tense for the present real conditional.

"If I were a carpenter
And you were a lady
Would you marry me anyway?
Would you have my baby?"

To form a present unreal conditional, use a simple past verb in the if clause. In the result clause, use would followed by a simple present verb.

Speakers sometimes use the future real conditional to threaten others. Listen to actor Liam Neeson in the 2013 movie Taken. In this scene of the movie, Neeson's character is on the phone threatening the man who kidnapped his daughter.

"If you let my daughter go now, that'll be the end of it. I will not look for you. I will not pursue you. But if you don't, I will look for you, I will find you, and I will kill you."

This is only a quick introduction to conditionals. In a future episode of Everyday Grammar, we will talk about past and mixed conditionals. Until then, we will leave you with country music stars Johnny Cash and June Carter.

basic – adj. forming or relating to the first or easiest part of something

clause - n. grammar : a part of a sentence that has its own subject and verb

tense - n. a form of a verb that is used to show when an action happened

unreal - adj. not real; not true