Update Required To play the media you will need to either update your browser to a recent version or update your Flash plugin.
By Dr. Jill Robbins
16 October, 2015


Welcome back to Everyday Grammar from VOA Learning English.

Today we look at a very common verb form in English – phrasal verbs. There are over 5,000 verbs that fall in this category. Do you know how to use them? In this episode, we will introduce this type of verb and help you understand how and why English speakers use them. In future episodes, we will give more information about the different kinds of phrasal verbs.

Our story begins back when other languages - French and Old Norse - began to influence Middle English. That period started with the invasion of the British Isles in 1066 by William the Conqueror, the Duke of Normandy. 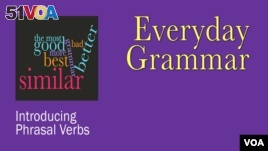 There were small particles, or prefixes, placed before verbs in Middle English to change their meaning.

One that we still use is for as in forlorn. The word lorn in Old English meant lost. Adding the prefix for created forlorn, meaning to be lonely or sad. As time went by, these prefixes started to disappear. Some reappeared as adverbs, separate words that came after the verb.

William Shakespeare, who wrote many plays between 1589 and 1613, is a well-known writer of the time. His works, written in Early Middle English, include over 5,744 phrasal verbs.

In Modern English, we use phrasal verbs more often in informal language. The reason for that practice goes back to the time when French influenced English. English speakers thought that French words, or words of Latin origin, were polite or cultured. When you want to speak more formally, you can use a single word of Latin or French origin instead of most phrasal verbs. For example, the phrasal verb look over can be replaced by review.

As English learners know well, daily conversation in English is almost never formal. So feel free to use phrasal verbs when you speak English in everyday settings.

The structure of phrasal verbs

Let's start with the basic structure of phrasal verbs. A phrasal verb is a phrase with two or more words: a verb and a preposition or adverb or both. An example is in this sentence:

"I looked up my cousin's phone number."

The verb is look, and up is the adverb. The phrasal verb look up means "to research" or "search for".

Some phrasal verbs allow an object to separate the phrase.

"I didn't know the number so I had to look it up."

Here, the pronoun it stands for the object, number.

Other phrasal verbs have to stay together. You can say you care for someone with the phrasal verb look after as in:

"I looked after Andy's dog while he was on vacation."

But you cannot say, "I looked his dog after while he was on vacation."

The first two kinds of phrasal verbs we looked at have two words. The next kind has three words. For example,

"I put up with the noise of my neighbor's party because I knew it was his birthday."

Here, the phrasal verb put up with means tolerate. The verb put is followed by the particle up and the prepositional phrase with + object (the noise).

These phrasal verbs must have direct objects. We cannot say, "I put up because I knew it was his birthday."

Let's look at some examples.

"Carrie asked me to help out with the cooking." Here, we can substitute a single verb, assist, for the phrasal verb help out.

However, we need to keep the preposition with when we paraphrase the sentence, as in:

"Carrie asked me to assist with the cooking."

Another three-part phrasal verb is look up to. It means admire. We can say,

"She looks up to her sister."

Here, sister is the direct object. We cannot move sister to any other place in the sentence, as in "She looks her sister up to."

How to identify a phrasal verb

Learners may be confused because there are combinations of verbs and prepositions that look like phrasal verbs. How do you tell the difference?

Here look means view and up means in a higher direction. On the other hand, a phrasal verb has a single meaning. We saw look up earlier, meaning "research."

Another test is whether you can move the object. You cannot say, "I looked the sky up," with the meaning "I gazed upwards at the sky."

So if you want to test whether a combination of words is a phrasal verb, ask these questions:

Can I substitute a single word for a two-word phrase?

The answer should be "yes."

Can I remove the direct object in a three-word phrase?

The answer should be "no."

In the next Everyday Grammar, we will take a closer look at phrasal verbs that can separate from the adverb. Listen for such a phrasal verb in this song by Beatles. Hint: it means to "solve" our problems.

prefix - grammar. a letter or group of letters that is added at the beginning of a word to change its meaning

adverb – grammar. a word that describes a verb, an adjective, another adverb, or a sentence and that is often used to show time, manner, place, or degree

informal – adj. (of language) relaxed in tone; not suited for serious or official speech and writing

preposition – grammar. a word or group of words that is used with a noun, pronoun, or noun phrase to show direction, location, or time, or to introduce an object

object - grammar. a noun, noun phrase, or pronoun that receives the action of a verb or completes the meaning of a preposition

Now it's your turn. Write a sentence that uses a phrasal verb and we will give you feedback in the Comments.