Update Required To play the media you will need to either update your browser to a recent version or update your Flash plugin.
By John Russell
23 July 2020


A few years ago, On the American television show Saturday Night Live, actor Jerry Seinfeld answered questions from the audience. However, the people who asked them were not ordinary showgoers, but Hollywood stars.

The questions were jokes that made fun of other actors. Tim Meadows asked if he could read from a magazine list of the worst actors to ever appear on the show. 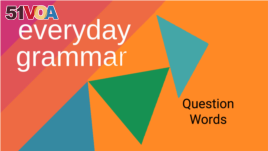 But let me just read who is dead last. And do we have a camera ready to cut to Robert Downey Jr.?

Jerry, when are we doing a tribute to the writers of SNL...?

That short discussion provides examples of two of the most common kinds of questions in English - "yes/no" questions and "wh-" questions.

What are question words?

A yes/no question is one that can be answered simply with a yes or a no.

And do we have a camera ready to cut to Robert Downey Jr.?

Jerry, when are we doing a tribute to the writers of SNL...?

That question includes the word "when," which starts with "wh-." The words what, where or why are also used for "wh-" questions. This is where the "wh-" name comes from.*

What did she say?

Question words often begin noun clauses - groups of words with a subject and a verb. These clauses act like a noun in the sentence.

Think back to our examples:

What did she say?

In response to these questions, a person might say:

I don't know where he works.

I didn't hear what she said.

In the first example, where he works is a noun clause.

In the second example, what she said is a noun clause.

I don't know where he works.

The next time you are listening or reading, try to find examples of question words – both in questions and in answers. Also pay attention to how speakers use intonation and word stress with question words.

Then practice using them a lot.

There are only a small number of question words, and they are useful in almost any situation you can think of. If your goal is to improve your speaking skills, then you must use question words with ease.

intonation – n. the rise and fall in the sound of your voice when you speak

word stress – n. greater loudness or force given to a syllable or a word in speech