The 'Should' vs. 'Shall' Debate

Update Required To play the media you will need to either update your browser to a recent version or update your Flash plugin.
By Ashley Thompson
17 December, 2015

Last week in Paris, leaders from 195 countries reached a major global climate agreement. In the final hours of meetings, one little word made the difference between success and failure.

Near the end of the talks, a version of the agreement contained the word shall instead of should. 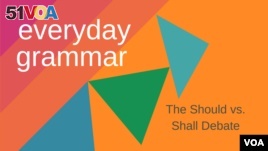 Should vs. Shall: Two words that almost sank the Paris climate agreement

These two words may seem similar, but pay close attention to how they are used here in Article 4.4 of the agreement:

In earlier versions of the agreement, the word shall in the first sentence had been should.

"We cannot do this," Kerry told him.

The change from should to shall introduced new legal and financial requirements. These requirements concerned Kerry and other U.S. leaders in Paris. The difference in meaning between these two words almost caused the first global climate agreement in 18 years to fail.

If these two words could almost ruin a major global climate deal, we should probably take a closer look at them here on Everyday Grammar.

Both should and shall are auxiliary verbs. Auxiliary verbs are followed by the simple form of a main verb. For example, "He should go." In this sentence, "go" is the main verb.

The auxiliary verb should has many different meanings. It is often used to express certainty or possibility. For example, "They should be here soon."

We also use should to give advice or an opinion. For example, if a friend says she is always tired, you might tell her, "You should get more sleep."

Should can also express a goal or something that is not required. Before the holidays, many Americans say, "I should lose weight." After the large holiday meal, we say, "I should exercise more!"

Should also expresses the idea that something is expected or correct. For example, "You should see the train station after you exit the Metro."

In other words, the goal of developing countries is to continue improving their efforts to reduce greenhouse gas emissions.

The word should does not express a legal requirement. But shall, in the case of the climate agreement, does.

We often use the auxiliary verb shall to indicate a promise. Often, that promise is part of a legal agreement.

Replacing should with shall created stronger legal requirements for developed countries than developing countries. That is why the U.S. opposed the word change. The U.S. argued that shall needed to be changed back to should.

French leaders told Kerry that someone must have made a typing mistake. Hours later, delegates from 195 countries agreed to the climate deal.

Kerry later said of the shall vs. should debate, "We made it crystal clear that every text up until this particular one had a different wording. So it wasn't hard for them to realize that somebody had made a mistake, and they accepted responsibility for it."

The auxiliary shall does not always have such serious effects. In the Everyday Grammar article, Six Differences Between British and American English, we learned that Brits sometimes use shall to express the future. For example, "I shall see you tomorrow." It is similar to the verb will.

And American Army General Douglas MacArthur once promised to return to the Philippines by famously saying, "I shall return."

In American English, we sometimes use shall in questions to make an offer. Shall is a more polite choice than should. For example, you might ask, "Shall I meet you after work?"

But for Secretary Kerry, there was nothing polite about the word shall in the Paris climate agreement.

That's it for this week's Everyday Grammar. We leave you with the words of American folk singer Bob Dylan. You should be able to hear the auxiliary shall in the song:

Any day now, any day now
I shall be released

developed country - n. a country that has fewer poor people because it has industry and can raise money

developing country - n. a country that has more poor people because it lacks industry and people are unable to buy the things they need

greenhouse (gas) - adj. relating to the warming of the Earth's atmosphere that is caused by air pollution

emissions - n. produced or released (such as energy or gas) from a source