Make Your Writing Smoother with Transitions

Update Required To play the media you will need to either update your browser to a recent version or update your Flash plugin.
By Fabio de Oliveira Coelho
30 October, 2015

Transition words are especially important in writing. They help you give more information with fewer words. When used skillfully, transition words can make your writing clearer and more concise. 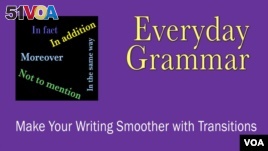 Here's an example. Listen to these three short sentences:

Twenty minutes passed. We were standing. We were at the bus stop.

As separate sentences, they could be related or unrelated ideas. Let's combine them into one sentence using the transition word and and the adverb still.

Twenty minutes passed, and we were still standing at the bus stop.

Notice how and clarifies the relationship among the three ideas. It shows that these three ideas belong together.

And belongs to a group of transition words called coordinators.

Coordinators combine ideas of equal value, or weight. Here are some more examples.

Cellular phones help us stay connected and allow us to find information easily.

The politician said he would raise taxes, and he promised to reveal the details of his plan.

In addition, moreover, and furthermore are good alternatives to and. Here are some examples.

Our new teacher is highly qualified. Moreover, she is friendly and down-to-earth.

The restaurant had slow service; furthermore, it was very expensive.

Sometimes you want to add and emphasize information. In fact is a good coordinator for stressing a detail. For example:

Notice that the first sentence is about children, while the second is about people in general. In fact helps the writer move from specific to general information. You can also use in fact to move from general to specific information, as in this example.

In this second example, the writer begins talking about schools in general and then gives an example. You can use as a matter of fact and indeed in the same way.

Did you notice the punctuation mark that looks like a mix between a colon and a comma? This is called the semicolon. You have the option of using a semicolon when you have two complete sentences that are closely related. Semicolons often confuse native speakers. They are not required; you can also just use a period.

In addition and in addition to are used to add information. But they have different sentence structures. In addition to is a subordinator. Subordinators show that one idea is more important than another. For example:

Cellular phones help us stay connected in addition to allowing us to find information easily.

In addition to can be followed by a gerund or a noun phrase. Here are two more examples:

In addition to providing medicine and food, volunteers handed out clothes.

A gerund is when the "-ing" form of a verb acts like a noun. The gerund phrase in this sentence is providing medicine and food.

In addition to medicine and food, volunteers handed out clothes.

In this sentence, the noun phrase is medicine and food.

In the same way, not to mention

Other useful subordinators include in the same way and not to mention. Both have a similar meaning to also. They introduce subordinate clauses. For example:

Egyptian youth demonstrated against their government in the same way that young people in Brazil have demonstrated.

For a more conversational tone, you can use not to mention to add information. For example:

Congress did not get any bills passed today, not to mention that many representatives did not even show up.

This is only an introduction to transition words and phrases. We will cover more of these in a future episode of Everyday Grammar.

Transition words can be a great way to express ideas in a concise and sophisticated way, especially in writing. Next time you read a news article or a textbook in English, look for some of these transition words and think about how they are used.

English learners sometimes force too many transition words into their writing. Start off slowly with simple transition words that you really understand. Not every paragraph requires a transition. With years of practice, you will start to use them in a more natural way.

Now it's your turn. Write a sentence with one of the transition words. We'll give you feedback in the Comments Section or on 51VOA.COM. And be sure you try the video quiz to the left on the web or below on mobile.

Fabio de Oliveira Coelho wrote this article as a guest writer for VOA Learning English. Adam Brock was the editor.

Fabio de Oliveira Coelho is a linguist and bilingual educator. He has worked on education and development projects in Brazil, the United States, Nicaragua, Indonesia, and Guinea-Bissau. He was born in Brazil and is a now U.S. citizen. Fabio is an English Language Fellow with the US Department of State in Semarang, Indonesia.

coordinator – n. a part of speech that connects words, sentences, phrases, or clauses

subordinator – n. a word that introduces a surordinate clause, a group of words that cannot stand alone as a sentence.

semicolon – n. a punctuation mark (;) indicating a pause, typically between two main clauses, that is more pronounced than that indicated by a comma

gerund – n. the –ing form of a vern that functions like a noun

sophisticated – adj. having or showing a lot of experience and knowledge about the world and about culture, art, literature, etc.