Update Required To play the media you will need to either update your browser to a recent version or update your Flash plugin.
By VOA
13 February, 2018

Among those urging major changes is Tristan Harris – a former high-level employee at Google. He just launched a group that will seek to gather and publish evidence of how digital devices and social media can harm children and young people.

Leaders of the organization – called the Center for Humane Technology – used to work for major technology companies. They hope to use this knowledge and experience to lead a "cultural awakening" among the public about the dangers of technology.

While at Google, Harris says he felt the company had great power over millions of people who used its technology. He spoke about his experiences during a conference last week in Washington.

"Never before in history have 50 mostly men - mostly 20 to 35 year-old-engineers - in 50 miles of exactly one place on earth, shaped what a billion people - really two billion - think, feel and do, and who they relate to."

He said Google was successful in building products that created certain thoughts in users' heads. "Whatever you're thinking is first, and then you choose out of the thoughts you have, because thought precedes action," he said. 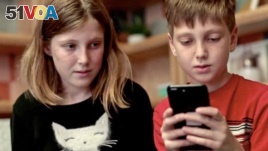 Last year, Facebook announced it was opening to children under age 13 to use its new Messenger Kids service. (Facebook)

Harris says he believes companies like Google, Facebook and Apple have a "moral responsibility" not to create technology products that can "hijack how the mind works."

The conference where Harris spoke was sponsored by Common Sense Media, a child and family activist group. The organization says research suggests that half of all teenagers feel addicted to their mobile devices, while about 60 percent of parents believe their kids are addicted.

The group also cites a recent study of eighth-graders that found heavy users of technology were 56 percent more likely to say they are unhappy, while 27 percent more likely to be depressed. Even Facebook cited research last year suggesting that social media use can harm mental health when used in certain ways.

And last month, two major investors in Apple raised fears about rising smartphone addiction among young users. In an open letter, the investors urged the iPhone maker to offer more choices and tools to help children fight addiction to devices. Such action "is both good business and the right thing to do," the letter said.

In response, Apple said the iPhone and other devices running on its mobile software already offer controls for parents to limit or block material considered harmful.

But Tristan Harris says Apple and other technology companies need to go much further - and actually change their current engineering and design methods - to be more kid friendly.

"I see this as, this is game over, unless we change course. Really, genuinely, I 100 percent believe that."

Groups to provide resources for learning

Common Sense Media is partnering with the Center for Humane Technology on a new campaign aimed at getting companies to make such changes. The effort includes a major public information campaign that will target schools, where research has also shown that mobile devices can hurt the learning process.

James Steyer is the founder of Common Sense. He says more than half of schools in the U.S. are already members of the organization. The group provides teachers and parents with learning materials intended to help students develop critical thinking skills and balance their digital lives.

Steyer says Common Sense will be providing even more resources to educators beginning in the new school year next fall.

"And you know what's going to be in there? Stuff about addiction, how to prevent digital addiction. Stuff about digital manipulation. I actually think if you tell kids how they're being manipulated, it will change their relationship with technology."

Most education experts believe technology will remain in schools far into the future. Steyer says the big question is, how will this ever-changing technology be used in schools going forward.

"And are we going to educate the teachers, the students and their parents about the thoughtful, ethical use of those platforms and the software? That's the whole challenge ahead of us."

Some U.S. schools, however, have tried to limit or remove technology to improve learning. One of them is in Silicon Valley, the center of the American tech industry.

The Waldorf School of the Peninsula does not use any computers or digital technology in its education programs up to the seventh grade. The school's website says while Waldorf teachers recognize the role technology can play in the classroom, it must wait until the student reaches the right developmental age.

"We observe that a child's natural, instinctive, creative and curious way of relating to the world may be repressed when technology is introduced into learning environments at an early age," the website says. When students reach high school, they are allowed to use computers and digital tools in the classroom.

There are many independent Waldorf Schools throughout North America. The schools center heavily on hands-on learning and aim to teach skills in "creativity and innovative thinking." They also place importance on students developing "social and emotional intelligence" as part of the educational experience.

addiction – n. strong and sometimes harmful need to regularly have or do something

precede – v. to happen or exist before something else

critical – adj. using or involving careful judgment about the good and bad parts of something

manipulation – n. the act of controlling someone or something in a clever and usually unfair or selfish way

instinctive – adj. behaving or reacting naturally and without thinking

curious – adj. having a desire to learn or know more about something