Executions Are Down, but Debate over Death Sentence Continues

Update Required To play the media you will need to either update your browser to a recent version or update your Flash plugin.
By Bruce Alpert
12 December, 2016


The United States is expected to execute fewer people in 2016 than any year in the past 25 years.

So far this year, 19 people have been put to death for their crimes nationwide. That is down from 28 last year, and 98 in 1998. Those numbers come from the Death Penalty Information Center, a non-profit organization based in Washington, D.C.

The death penalty is sometimes called the ultimate punishment. The question of whether it should be used as punishment continues to divide Americans.

Supporters say that people found guilty of horrible crimes should get the ultimate punishment. They believe the death penalty will act as a deterrent. By deterrent, they mean it might cause a person to decide against killing someone.

But opponents argue that a moral society does not put people to death. They say when an innocent person is found guilty of a crime, there is no way to fix the mistake if that person already has been executed.

The arguments on both sides can be very emotional.

Marc Klaas lost his daughter Polly in 1993. The 12-year-old was taken from a party, raped, and then murdered.

Before her murder, Marc Klass opposed the death penalty. But now he believes it is punishment that should be available for the worst crimes -- killing a child, killing police officers or killing more than one person.

"The whole idea that somebody like Richard Allan Davis, the guy that murdered my daughter, would be in a position, after his extensive criminal history, to even get his hands on my child, is absolutely preposterous. And apparently, the only way that can be stopped is through his execution."

Klass noted that Davis once said he gets sexual pleasure in prison from thinking about tying up his past victims.

"Now, that tells me that the guy that murdered my child is sitting in his cell on death row, re-victimizing her on a daily basis. And the only way that re-victimization will ever cease is the day that he ceases to exist. And I think that her memory and her spirit deserves better than the consideration he has given her..." 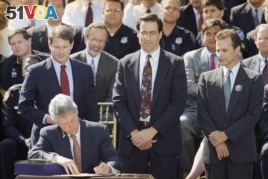 Marc Klaas is standing at right, as then President Bill Clinton signs a crime bill in 1994.

Davis has been jailed on death row in California since 1996. Death row is the part of a prison that houses people sentenced to die.

None of the over 700 people now on death row in California have set execution dates.

Bri-anne Swan is a singer-songwriter, wife, and mother of two. She lives in Toronto, Canada.

Swan opposes the death penalty on moral grounds. Two years ago, she began sending letters to Ramiro Gonzales. He is jailed on death row in the American state of Texas. He was sentenced to die after he admitted killing 18-year-old Bridget Townsend in 2001.

Gonzales asked Swan to come to Texas and witness his execution, which was set for August. She agreed and decided to make the visit, even when the execution was delayed.

Swan and Gonzales talked for 10 hours. She said there was sadness on the last day of her Texas visit. Both Swan and Gonzales knew the next time she might see him would be the day of his execution, she said.

Swan wrote to Texas Governor Greg Abbott, asking him to stop the execution.

When Gonzales killed Bridget Townsend, he was 18, addicted to drugs, "dealing with the loss of his beloved aunt and years of sexual abuse by a male relative," Swan said. Today, she told Abbott, he is a "gentle and kind man who has a deeply spiritual life."

Gonzales did a terrible thing at 18, "but he is not that person today," she added. 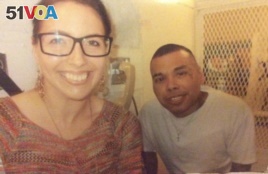 Death Penalty Gets Vote in 3 States

Voters in three states -- California, Nebraska and Oklahoma -- voted last month to permit use of the death penalty for some crimes. Thirty one states give courts the right to sentence prisoners to death. Nineteen states do not permit the death sentence.

More Americans support the death penalty than oppose it -- 49 percent for and 42 percent against. That information comes from the Pew Research Center. But the percentage is down 7 percent from last year, and way down from the 1990s, when 80 percent of the U.S. population supported the death penalty, Pew said.

Robert Dunham is executive director of the Death Penalty Information Center. He opposes the death penalty.

Dunham said a good number of people have been sentenced to death, despite strong questions about their guilt. He said there also appears to be racial bias. Blacks who kill whites are more likely to face the death penalty than other people found guilty of murder.

Michael Rushford is president of the Criminal Justice Legal Foundation. He supports the death penalty.

Without the threat of execution, he said, it is very difficult to stop murderers from killing again or attacking their guards. People already serving life sentences know that, without the death penalty, courts cannot increase their sentences -- no matter what they do, Rushford said.

multiple - adj. more than one

apparently - adv. used to describe something that appears to be true