Update Required To play the media you will need to either update your browser to a recent version or update your Flash plugin.
By Hai Do
28 September 2022


Drugmakers Biogen and Eisai say their experimental drug lecanemab slowed the progress of Alzheimer's disease in a large human study the companies did.

The results could mean a rare victory in a field filled with failed experiments to find an effective treatment for the disease.

The companies said early results showed that the treatment reduced cognitive loss by 27 percent when compared to a placebo, an inactive substance. The 18-month-long study involved 1,800 subjects. All had been identified with early-stage Alzheimer's. The patients were measured for mental decline and their ability to do daily activities like putting on clothes and feeding themselves. 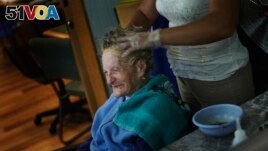 FILE - An Alzheimer's patient has her hair done inside the Alzheimer foundation in Mexico City April 19, 2012. Alzheimer's slowly attacks areas of the brain needed for memory, reasoning, communication and basic, daily tasks.

Dr. Jeff Cummings is the director of the Chambers-Grundy Center for Transformative Neuroscience at the University of Nevada Las Vegas. The expert told Reuters, "If you can slow a disease by almost 30 percent, that's fantastic."

Expert Ronald Petersen also praised the findings. "It's not a huge effect, but it's a positive effect," he said. Peterson directs the Mayo Clinic Alzheimer's Disease Research Center in Rochester, Minnesota.

A statement from the Alzheimer's Association called the findings the most hopeful to date for possible treatments of the disease causes.

Eisai said it would discuss the full results from the study in late November. It also plans to publish findings in a medical publication. And the company said it is seeking quick approval for the drug in the United States., Japan and Europe by early next year.

The World Health Organization estimates that 50 million people around the world have dementia. Alzheimer's disease might be the cause of 60 to 70 percent of dementia cases. Alzheimer's slowly attacks areas of the brain needed for memory, reasoning, communication and basic, daily tasks. There is no known cure for the disease. And long-standing treatments on the market just manage symptoms.

Last year, Biogen's aduhelm became the first new Alzheimer's drug introduced in 20 years. Given weak evidence of its effectiveness and the high prices, doctors and insurers have not given the treatment to patients.

The beta-amyloid protein is involved in the development of Alzheimer's. Both lecanemab and aduhelm aim to remove the protein from the brain. But lecanemab tries to clear the protein before it could form a hard cover on the brain.

Another drugmaker, Eli Lilly, said it is also developing a possible treatment, donanemab, that targets the protein.

The race to slow the progression of Alzheimer's comes as the number of Americans living with the disease is expected to double to 13 million by 2050, the Alzheimer's Association said.

Around the world, Alzheimer's Disease International said the number of disease cases could reach well over 100 million people by 2050 if no effective treatment is found.

stage - n. a period of growth or development

dementia - n. a mental illness that causes someone unable to think or understand