Update Required To play the media you will need to either update your browser to a recent version or update your Flash plugin.
By VOA
28 October, 2014
51VOA听写整理，转载请注明出处。文本仅供参考，欢迎纠错！

Researchers are hurrying to develop effective treatments and vaccines for Ebola. The disease has killed more than 4,500 people. Most of the victims lived in one of three West African countries - Guinea, Liberia or Sierra Leone.

In the United States, the government's process for approving new drugs can often take years. But treatments for Ebola are moving quickly through the approval process.

Before US government officials approve a new drug, researchers must perform detailed scientific tests, what are called clinical trials. The tests must be done on humanbeings to show that the experimental treatment is both safe and effective. These drug trials usually involve thousands of people and can take many years to complete. 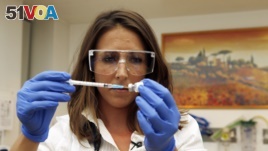 FILE - Felicity Hartnell, who is a clinical research fellow at Oxford University, holds a vial of an experimental vaccine against Ebola in Oxford, England, Sept. 17, 2014.

But there are exceptions. Thomas Geisbert is a microbiologist at the University of Texas medical branch in Galveston. He says the U.S. Food and Drug Administration can make an exception through what he calls its "animal rule." This enables researchers to get fast approval when faced with a deadly disease like the Ebola virus.

Mr Geisbert helped develop what is known as the VSV Ebola vaccine, this vaccine recently moved to human clinical trials at the Walter Reed Army Institute of Research in Maryland. The tests involve 20 healthy volunteers.

Mr Geisbert says that the animal rule requires only that scientists demonstrate that a treatment is effective in an animal model of human disease. This time, he says, the human model of disease was monkeys.

"In conjunction with that, you do a conventional phase one trial. That's just a study where you put a vaccine or treatment into a healthy human volunteer just to make sure that you know in normal, healthy people that your vaccine or drug does not cause any disease or serious adverse event," Geisbert said.

Another experimental drug called zMapp went straight from the laboratory to Ebola patients. The Food and Drug Administration also bypassed human safety trials to treat a handful of patients in the United States.

Many researchers are hard at work to develop effective treatments and vaccines for Ebola. Canadian researchers made the VSV vaccine, which is now being tested in Maryland. The British drug company GlaxoSmithKline has made another promising but experimental vaccine.

The safety of that vaccine is currently being tested in Mali. The West African nation shares a border with Guinea, where the virus has infected many people. As of now, no Ebola cases have been reported in Mali.

Researchers say, the promising vaccine will move into a more advanced human testing early next year. They will use these tests to show if the vaccine is safe for human use.