Experts Aim to Understand Japan’s Successes Against the Coronavirus

Update Required To play the media you will need to either update your browser to a recent version or update your Flash plugin.
By Ashley Thompson
02 January 2022


Many countries around the world are dealing with their worst coronavirus outbreaks yet. But one country, Japan, is seeing very few COVID-19 infections. Observers are trying to learn why.

As recently as late summer, Japan's coronavirus situation was not good. Deaths linked to COVID-19 were being reported each day. Hospitals were filled with coronavirus patients.

In September, Japan sped up its vaccination campaign. The country saw a large drop in the number of reported cases. The number of deaths also sharply decreased. 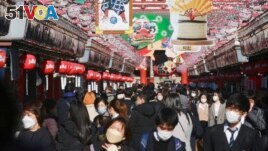 People wearing face masks to protect against the spread of the coronavirus walk under decorations for new year through the alley leading to Asakusa Sensoji Buddhist temple in Tokyo, Dec. 21, 2021. (AP Photo/Koji Sasahara)

Since then, the situation has continued to improve. In December, Japan has reported an average of less than one COVID-19 death a day. That is a shockingly low number for a country of 126 million people. No one knows exactly why Japan has experienced such success.

There are many possible explanations. Nearly 80 percent of Japan's population is fully vaccinated. Nearly everyone wears masks. And, even after the government ended some restrictions this autumn, people continued to socially distance themselves.

Some researchers have pointed to Japan's low rates of obesity. Several recent studies have found that COVID-19 is more severe in overweight individuals.

Cultural customs may also play a part. For example, Japanese do not generally kiss, hug, or even shake hands when they meet.

Many Japanese are also quiet in public settings, notes Kentaro Iwata. He is an infectious disease specialist at Japan's Kobe University.

"Masking and keeping silent in public places is very important [for fighting the virus]. Everybody knows it, but practicing it can be very difficult in some parts of the world, maybe due to cultural reasons," Iwata said to VOA by email.

Those reasons, however, do not explain why nearby South Korea is dealing with its worst COVID-19 outbreak yet. South Korea shares many of the same cultural customs.

Another possible explanation is that Japan is testing fewer people than other countries, said Kenji Shibuya. He is an epidemiologist and researcher at the Tokyo Foundation for Policy Research.

In the first half of December, Japan tested an average of 44,623 people a day, according to government data. South Korea, whose population is less than half that of Japan, carried out an average of 238,901 tests a day during the same period, according to official data.

Because of Japan's lack of testing, it is difficult to believe that official case numbers represent reality, Shibuya told VOA in an email.

However, if a lack of testing were the reason, Japan would have likely seen a rise in the number of hospitalizations or deaths.

Because there is not any clear explanation, some researchers have tried to search for a so-called X-factor. One study even suggested many Japanese people share a genetic feature linked to white blood cells that helps fight against COVID-19. Others think that the coronavirus version spreading in Japan may have changed itself so much it is disappearing.

But, the battle is not over, said Shibuya. He said he still expects the country to see a winter wave of infections.

Japan identified its first cases of community spread of the omicron version of the virus. Scientists have said omicron spreads much faster than any earlier version of the virus. Officials say many of those found to be infected with omicron in Japan have no recent history of foreign travel.

outbreak – n. a sudden occurrence of disease breaking out

obesity –n. the state of being overweight in an unhealthy way

hug –v. to put your arms around someone especially as a way of showing love or friendship

practice –v. to do something regularly as part of ordinary life

due to –adj. because of something

epidemiologist –n. a person who studies how disease spreads and can be controlled

according to –prep.as stated, as reported somewhere

X-factor –n. an unusual and notable quality that makes something stand out