Update Required To play the media you will need to either update your browser to a recent version or update your Flash plugin.
By Jonathan Evans
24 June 2022


Scientists say climate change is one reason for early rains that brought major floods to Bangladesh and northeastern India.

This year's heavy rainfall came as early as March. 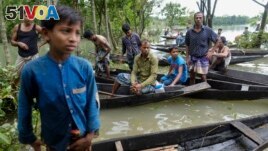 It may take a long time to understand how much climate change played a part in the floods. But scientists say that climate change has made monsoons unpredictable over the past 10 or 20 years. This means that much of the rain expected to fall in a year is arriving in only a few weeks.

The northeastern Indian state of Meghalaya received nearly three times its average June rainfall in just the first three weeks of the month. Neighboring Assam received double its monthly average in the same period. Several rivers flow from the two states into the Bay of Bengal in Bangladesh.

Roxy Matthew Koll is a climate scientist at the Indian Institute of Tropical Meteorology in Pune. He said the monsoons have been changing since the 1950s. There have been longer periods of dry weather mixed with periods of heavy rain. Koll added that extreme rainfall events were also expected to increase.

Until now, floods in northeastern Bangladesh were rare. Assam state usually faces floods later in the year during the usual monsoon season. Anjal Prakash is a research director at India's Bharti Institute of Public Policy. He said the amount of early rain this year makes the current floods an "unprecedented" situation.

"This is something that we have never heard of and never seen," he said.

Bangladesh's Prime Minister Sheikh Hasina recently said the country had not faced such a crisis in a long time. She noted that the water coming from Meghalaya and Assam in India had affected the Sylhet area in northeastern Bangladesh.

Hasina said that floodwaters would go away soon from the northeast. But the water would likely hit the country's south on the way to the Bay of Bengal.

"We should prepare to face it," she added.

At least 42 people have died from floods in Bangladesh since May 17. Indian officials reported that flood deaths have risen to at least 78 in Assam state. Seventeen others were killed in landslides.

Hundreds of thousands of people are displaced. Millions in the area have been forced to move into evacuation centers.

Bangladesh is one of the countries considered most at-risk to flooding and the poor are strongly affected.

Mohammad Arfanuzzaman is a climate change expert at the United Nations Food and Agriculture Organization. He said that floods like the one this year could have widespread effects. Farmers could lose their crops and be forced into debt. Children might not be able to go to school and could face an increased risk of disease.

"Poor people are suffering a lot from the ongoing flooding," he said.

unprecedented – adj. not done or experienced before

evacuation – n. the removal of persons or things from an endangered area