Update Required To play the media you will need to either update your browser to a recent version or update your Flash plugin.
By John Russell
09 April 2022


More than two years into the COVID-19 pandemic, United States health officials are discussing how to best protect Americans from the ever-changing coronavirus.

On Wednesday, a group of vaccine advisers to the Food and Drug Administration spent hours debating questions about changing vaccine shots and doing future booster campaigns. They did not reach any exact decisions. 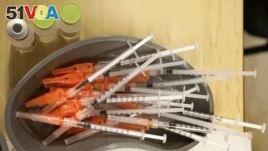 The FDA recently approved a fourth shot of the Pfizer or Moderna vaccines for anyone 50 or older and for some younger people with severely weakened immune systems. The move is part of an effort to get ahead of another possible surge.

But the FDA's vaccine chief Dr. Peter Marks said at the meeting "we simply can't be boosting people as frequently as we are." He called the latest booster update a temporary measure to protect Americans while government officials decide whether and how to change current vaccines.

Marks cautioned that reduced vaccine protection, new variants and colder weather in the autumn could raise the risk of more surges.

One area where experts appeared to agree is that vaccines should be judged on their ability to prevent severe disease that leads to hospitalization and death.

Dr. Mark Sawyer of the University of California, San Diego, said, "We need to focus on the worst case, which is severe disease..."

By that measure, the current vaccines have held up well.

During the last omicron-driven surge, two vaccine doses were nearly 80 percent effective against needing a breathing machine or death — and a booster pushed that protection to 94 percent, federal scientists recently reported.

But only about half of Americans eligible for a third shot have gotten one. And many experts said it was not the best idea to continue asking Americans to get boosted every few months.

An expert from the Centers for Disease Control and Prevention suggested that the 80 percent protection from severe disease could become the standard for vaccines.

"I think we may have to accept that level of protection" and then use other methods, said Dr. Amanda Cohn, CDC's chief medical officer.

Presentations at the meeting by government health officials and independent researchers explored the difficulty of predicting when the next major COVID-19 variant might appear.

Trevor Bedford of the Fred Hutchinson Cancer Research Center said a major new strain like omicron could arrive anywhere from every 1.5 years to once a decade, based on current data.

All three COVID-19 vaccines now used in the U.S. are based on the original coronavirus that appeared in late 2019. Updating the vaccines will be a difficult job, likely requiring communication between the FDA, manufacturers and international health authorities.

To get the vaccines to market quickly, the FDA used shorter ways to judge effectiveness, mainly looking at the early vaccine effects on the immune system's antibody levels. A number of experts said they wanted better data from studies that follow patients over time to see who gets sick or dies.

But that approach would likely take too much time.

Dr. Ofer Levy of Harvard Medical School said, "it's going to be hard to generate all the data we want in short order when a new variant emerges."

Robert Johnson, a representative for the U.S. Biomedical Advanced Research and Development Authority (BARDA) described the small amount of time that manufacturers could have to remake, study and mass produce an updated vaccine by September.

"If you're not on your way to a clinical trial by the beginning of May, I think it's going to be very difficult to have enough product across manufacturers to meet demand," he said.

The process for updating yearly flu vaccines offers a possible plan, as laid out by a representative from the World Health Organization.

Twice a year, WHO experts recommend updates to flu vaccines to target new strains. The FDA then brings those recommendations to its own vaccine panel, which votes on whether they make sense for the U.S.

But COVID-19 has not yet fallen into a predictable pattern like the flu. And as the coronavirus evolves, different strains may become stronger in different parts of the world.

Several experts said they would need more meetings with more data and proposals from the FDA to decide on a plan.

Oveta Fuller of the University of Michigan's Medical School said, "We've never been here before. We're all working together to do the best we can and it's very complex."

Matthew Perrone reported on this story for the Associated Press. John Russell adapted it for Learning English.

booster – n. a substance or dose used to renew or increase the effect of a drug or immunizing agent

variant -- n. something that is slightly different from the standard form

eligible – adj. qualified to participate or be chosen

approach -- n. a particular manner of taking such steps

standard – n. something set up and established by authority as a rule for the measure of quantity, weight, extent, value, or quality

generate – v. to bring into existence:

pattern – n. a reliable sample of traits, acts, tendencies, or other observable characteristics