Experts Divided over How Trump Policies Will Affect Oil Industry

Update Required To play the media you will need to either update your browser to a recent version or update your Flash plugin.
By Mario Ritter
08 January, 2017


Oil industry leaders and experts have conflicting opinions about what the policies of U.S. President-Elect Donald Trump could mean for the oil industry.

Jack Gerard is president of the American Petroleum Institute, a group that represents the oil industry.

Gerard notes that Trump has promised to change regulations and reform taxes. He says that could help energy companies and lead to more oil industry jobs.

Gerard said America's oil and natural gas industries support 9.8 million jobs. He thinks the industry could create hundreds of thousands of additional jobs if what he called "smart" regulation was put in place. He says the "smart" rules would replace ones that appear to duplicate existing measures or are in competition with them.

Other observers say some of Trump's proposed policies and his statements present problems for international oil markets.

Diane Munro is an oil industry expert. In December, she wrote a story for the Arab Gulf States Institute in Washington, DC. The non-profit group aims to increase understanding of the Gulf States in the United States.

Munro wrote that some of Trump's statements present, in her words, a "cauldron of contradictions." For example, Trump has strongly criticized the 2015 nuclear agreement between Iran and world powers. The agreement eases many economic restrictions on Iran in return for limits on its nuclear activities. The president-elect said he would consider canceling the deal.

Munro wrote that Trump also has threatened to ban oil imports from the Middle East, accusing oil producers there of unfairly controlling prices. Statements against the Organization of Petroleum Exporting Countries (OPEC) have been considered unfriendly to Gulf countries and Saudi Arabia, she noted.

Munro added that such statements are likely to cause concern or "rattle" the oil market. They also might hurt already the U.S. relationship with Saudi Arabia, which she described as "fraying."

At least one nominee for Trump's cabinet has strong ties to the oil industry. His choice for Secretary of State, Rex Tillerson, retired as chief executive officer at ExxonMobil earlier this month. Tillerson is to receive a retirement deal valued at $180 million from his former employer.

Gerard praised the nomination as "world class." He said Tillerson's skills can represent the nation well. 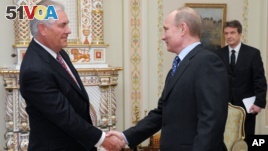 But Munro called the choice "oil-centric." She wrote the nomination appears to show the growing influence of Russia on U.S. policy. She said this will create a mixed message for America's Middle East allies.

Tillerson has good relations with Russian President Vladimir Putin. Under his leadership, ExxonMobil has developed oil projects in Russia and also in the South China Sea, with Vietnam.

Oil prices have been rising since OPEC members announced a deal to reduce production in late November.

OPEC has historically had a difficult time enforcing its agreements, however. It is difficult to predict how the cartel's latest move will affect prices this year.

Jim Randle reported this story for VOANews. Mario Ritter adapted it for Learning English. George Grow was the editor.

regulation – n. an official rule about how something should be done

duplicate – v. to make something that is basically a copy of something else

contradict – v. to make the opposite argument

cartel – n. a group that fixes prices among members of a group of producers