Update Required To play the media you will need to either update your browser to a recent version or update your Flash plugin.
By John Russell
14 September, 2017


The number of young people who play American football decreased from 2008 to 2016 according to the Aspen Institute, a research center.

There are many reasons for this decrease.

But some parents, such as businessman Mark Cuban, will not let their children play the sport because of concern about brain injuries.

A recent study seems to support some of these concerns. It gives more evidence that too much American football is seriously damaging the brains of players. 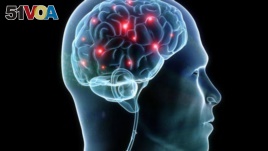 synapses in the brain

Scientists at the Brain Bank are studying a kind of brain injury known as Chronic Traumatic Encephalopathy.

The Brain Bank is a center at Boston University in Massachusetts where brains and other tissue are stored and studied.

Chronic Traumatic Encephalopathy, or CTE, is caused by collisions that push the brain around inside the skull.

In a recent study, the scientists at the Brain Bank found high levels of CTE in dead football players.

The scientists studied the brains of 202 former players. These athletes, who had donated their brains for research, played at high school, college or professional levels.

Many of those found to have CTE suffered from behavioral or mood problems during their lifetimes. Many also suffered from dementia, too.

Amy McKee is one of the lead researchers at the Brain Bank. She said CTE can affect even the brains of young people.

"We can see spaces near the hippocampus, which is a part of the brain that's important for learning and for memory, and we can see that there has been shrinkage there as well. To see this in such a young individual is quite startling."

McKee says helmets can give some protection from CTE. But, she explains that the risks are still great.

"They [helmets] will never be the solution for CTE...They may make it less likely, but it is always going to be a risk once you have head contact," she said.

McKee and her team are now looking for ways to diagnose CTE before a player dies. They are also looking for drugs that might treat it.

Kevin Enochs reported on this story for VOA News. John Russell adapted it for Learning English. Mario Ritter was the editor.

collision– n. : a crash in which two or more things or people hit each other

donate – v. to give (money, food, clothes, etc.) in order to help a person or organization

dementia – n. medical a mental illness that causes someone to be unable to think clearly or to understand what is real and what is not real

helmet – n. a hard hat that is worn to protect your head

diagnose – v. to recognize (a disease, illness, etc.) by examining someone