Experts: North Korea May Be Misreading the 2020 US Election

Update Required To play the media you will need to either update your browser to a recent version or update your Flash plugin.
By Susan Shand
23 December, 2019


Some North Korea experts are worried that leader Kim Jong Un might become too sure of his ability to affect the 2020 U.S. presidential election.

North Korea said it wants the U.S. to agree to additional concessions in nuclear talks by December 31. It also has promised a "Christmas gift" for the United States. Some experts believe that could mean a possible long-range missile test.

Such a move could damage nearly two years of diplomacy between U.S. President Donald Trump and Kim. Additionally, it could suggest that Kim believes he can get a better deal. This is most likely because he considers Trump weakened by the impeachment process in the U.S. House of Representatives. He also may see a difficult reelection campaign that is set to enter a more demanding period of time.

Trump has described his meetings with Kim as a major foreign policy victory. He has sometimes linked North Korea with his 2020 reelection chances. There is, however, little evidence suggesting it will be a major issue for U.S. voters.

North Korea has not directly threatened to interfere with the election. However, its state media have accused the U.S. of using the nuclear talks to serve as a foreign policy win for Trump during the election. North Korean officials also have said Trump must be in "great jitters" about North Korea's next move.

"They truly believe they can influence the presidential election in November," said Bong Young-shik. He teaches at Seoul's Sogang University 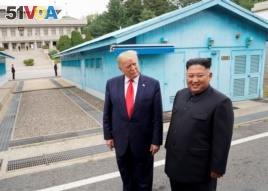 Trump takes credit... but little has been agreed to

North Korea's actions may be the result of Trump's words. At times, he described the nuclear talks as having succeeded.

Trump has also taken credit for Kim's decision to observe a two-year-long suspension on long-range missile and nuclear tests. By threatening to end the suspension, Kim seems to be trying to improve his negotiating position.

"I'd be surprised if North Korea acted hostilely," Trump said in early December. "He knows I have an election coming up. I don't think he wants to interfere with that, but we'll have to see."

Public opinion studies suggest domestic, not foreign policy issues are the most important ones in U.S. presidential elections.

For example, studies show that only about 13 percent of voters said foreign policy was the most important issue during the 2016 presidential election.

Before that election, the Pew Research Center reported that most voters said that Hillary Clinton would make better foreign policy decisions.

John Delury is a professor at Seoul's Yonsei University. He said "it would take a war really for North Korea to (effect) who the next American president is."

"He wants to be able to say he made a deal," said Gwenda Blair. She has written about the Trump family for many years.

concession – n. the act of giving up something or doing something in order to reach agreement

impeachment – n. to charge (a public official) with a crime done while in office

domestic – adj. of, relating to, or made in your own country