Experts Say US Adults Should Get Tested for Anxiety

Update Required To play the media you will need to either update your browser to a recent version or update your Flash plugin.
By Anna Matteo
10 October 2022


An influential health guidelines group in the United States says doctors should test adult patients for anxiety, as part of usual care.

The U.S. Preventive Services Task Force is an independent group of healthcare experts serving as volunteers.

The group advises anxiety testing for everyone from age 18 to 65. The group began its review on anxiety before the COVID-19 pandemic. However, given the increase in mental health problems with the pandemic, the new guidance is "very timely," said Lori Pbert. 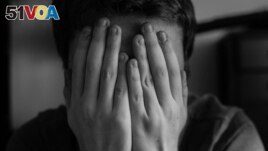 Experts in the U.S. now suggest that adult showing no signs of anxiety be tested for the condition during regular care visits with their doctor.

As a member of the task force, Pbert is also a psychologist and researcher at the University of Massachusetts Chan Medical School. A story from the Associated Press on the task force's new guidelines states that anxiety disorders are among the most common mental health problems.

The task force notes that about 40 percent of American women are affected by anxiety at some point in their lives. About one in 10 pregnant women and those who have just given birth experience anxiety. Also, anxiety disorder affects more than one in four men in the United States

Worldwide, anxiety is also on the rise -- especially among women.

Back in early March, the World Health Organization released a report on the situation of mental health disorders. That report states that in the first year of the COVID-19 pandemic, anxiety and depression increased by 25 percent around the world.

Anxiety can show as panic attacks, nervousness, and heightened fear.

Common testing tools include answering questions about symptoms during a primary care doctor visit, the task force said. One such question is "How often do fears and worries affect your usual activities?" The task force did not say how often patients should be tested.

Pbert said it is also important to understand that more than testing is necessary to identify an anxiety disorder. The next step, she said, is a thorough examination by a mental health professional. Pbert also noted that finding good care can be difficult. Currently in the U.S. there are shortages in the mental health care industry.

Megan Whaler is a 31-year-old from Hoboken, New Jersey. In 2013, she was identified as having anxiety disorder.

"Health is health," said Whalen, "whether the problem is visible or not."

She has gotten help from medicine and talk therapy. However, her symptoms worsened during the pandemic, and she temporarily moved back to her parent's home.

"The pandemic made me afraid to leave home -- my anxiety telling me anywhere outside of my childhood house was unsafe," Whelan said. She says she is still struggling.

The task force said there is not enough research on older adults to suggest anxiety testing in those older than 65.

In April, the group issued similar guidance for children.

General, or primary, care doctors in the U.S. already know of the increasing cases of anxiety. In 2020, a group connected with the American College of Obstetricians and Gynecologists suggested that anxiety testing be part of usual care for patients starting at age 13.

Melissa Lewis-Duarte is a 42-year-old wellness coach and mother of three in Scottsdale, Arizona. She says deep, steady breathing, practicing meditation, stating things for which she is thankful have all helped her anxiety.

"Doctors say 'make sure you're sleeping' ... 'control your stress'," she said, noting that it can be difficult to put self-care first.

anxiety – n. a feeling of worry, nervousness, or unease, typically about an imminent event or something with an uncertain outcome.

task force – n. a temporary grouping under one leader for the purpose of accomplishing a definite objective

panic attack – n. an episode of intense fear or apprehension that is of sudden onset and may occur for no apparent reason or as a reaction to an identifiable triggering stimulus (as a stressful event)

symptom – n. a noticeable change in the body or its functions that indicates the presence of a disease or other disorder

visible – adj. capable of being seen

meditation – n. the act or an instance of planning or thinking quietly