Update Required To play the media you will need to either update your browser to a recent version or update your Flash plugin.
By Jill Robbins
10 August 2021


A Russian official said engineers will study a problem that caused the International Space Station to spin out of its normal path.

Sergei Krikalev is the director of crewed space programs at the Russian space corporation Roscosmos. He said that last week's incident did not cause any observable damage to the space station. But he added that experts would need to study the possible effects of the problem.

"It appears there is no damage," Krikalev said in a broadcast by Russian state television. But experts will study whether there was pressure on the station and what the results are.

The U.S. space agency NASA reported early this month that the station was operating normally and noted that the spin was within safety limits for its systems.

The problem happened on July 29 when engines on Russia's Nauka laboratory module fired shortly after it arrived at the International Space Station. That made the space station slowly spin about one-and-a-half times. Russia's mission controllers fired engines on another Russian module and a Russian supply ship attached to the space station to stop the spinning. Then the other vehicles pushed the station back to its normal position. 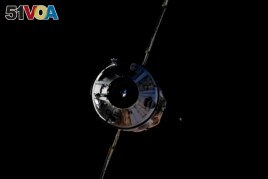 In this photo taken by Russian cosmonaut Oleg Novitsky and provided by Roscosmos Space Agency Press Service, the Nauka module is seen prior to docking with the International Space Station on Thursday, July 29, 2021.

Both U.S. and Russian space officials said the station's seven-person crew was not in danger during the incident.

Loss of communication with ground crew

The station needs to be in the right position to get the most sunlight for its solar cells and to communicate with support teams back on Earth. The space station's communications with ground controllers stopped two times for a few minutes because of the problem.

NASA said in a tweet that the station was 45 degrees out of position when Nauka's engines were still firing. The ground team talked with the crew about the loss of control.

Last week, NASA noted that its study of the event "has shown the space station remains in good shape with systems performing normally." The agency added that any changes were not outside of safety limits.

Roscosmos' Krikalev is a veteran of six space missions who spent a total of 803 days in orbit. He noted that firing the engines to change the station's position puts some pressure on the parts of the station. That makes it necessary to do a complete study of them.

"The station is a rather delicate structure, and both the Russian and the U.S. segments are built as light as possible," he said. Specialists will look at all the parts such as those that hold the batteries. "It is too early to talk about how serious it was, but it was an unforeseen situation that requires a detailed study," he added.

Krikalev said Nauka's engines fired because of a mistake in the control system. The computer did not know that the lab module had already connected to the station and fired the engines to pull it away.

Nauka is the first new module for the Russian part of the International Space Station since 2010. It has more space for scientific experiments and room for the crew. Its launch was delayed since 2007 because of technical problems. Russian crew members will have to perform up to 11 spacewalks beginning in early September to prepare it for operation.

Vladimir Isachenkov reported on this story for the Associated Press Jill Robbins adapted it for Learning English. Mario Ritter, Jr. was the editor.

module – n. a part of a space vehicle that can work alone

segment – n. one of the parts into which something can be divided

battery –n. a device that stores and supplies electricity to machines

What do you think of the incident at the International Space Station? We want to hear from you. Write to us in the Comments Section.