Update Required To play the media you will need to either update your browser to a recent version or update your Flash plugin.
By VOA
02 January 2022


On December 25, the new James Webb Space Telescope launched into space from South America on a European Ariane 5 rocket.

"[countdown from 10 in French, continued in English] Lift off! From a tropical rainforest to the edge of time itself, James Webb begins a voyage back to the birth of the universe."

NASA and the European Space Agency's Hubble telescope has been circling the Earth for nearly 32 years. Webb is widely seen as the next generation telescope. 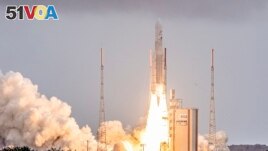 Arianespace's Ariane 5 rocket with NASA's James Webb Space Telescope onboard lifts up from the launchpad, at the Europe's Spaceport, the Guiana Space Center in Kourou, French Guiana, on December 25, 2021. (AFP Photo)

Experts recently spoke with The Associated Press about the differences between the two telescopes. But when talking with scientists of astronomy, do not ask them to pick a favorite.

"Comparing Hubble and Webb is like asking if you love your second child as much as your first," said Susan Mullally. She is Webb's assistant project scientist at the Space Telescope Science Institute in Baltimore, Maryland in the United States.

"Hubble will always be loved for its awe-inspiring images of our universe and will continue to collect important data for astronomers." But the Webb telescope, Mullally adds, will permit us to see places in the universe never before seen. The Webb telescope is bigger and 100 times more powerful than Hubble.

In 1990, the Hubble caught a ride to its orbit inside NASA's space shuttle Discovery. For Webb, the NASA website explains that it was helpful for the launch to be near the equator because "...the spin of the Earth can help give an additional push."

Location and problems in space

Hubble circles 530 kilometers overhead. That distance was determined by the abilities of NASA's space shuttles. When problems happened on Hubble, ground control specialists and astronauts were able to fix them.

However, this will not be the case with Webb. Webb is heading to a much more distant spot -- 1.6 million kilometers away. If it runs into problems, it will be on its own.

All the light we see

Webb is expected to record light from the universe's first stars and galaxies. This is beyond the abilities of Hubble. This light will show us how the original stars looked 13.7 billion years ago.

Hubble has looked back as far as 13.4 billion years. Astronomers want to close that 300 million year hole with Webb. This will come ever closer in time to the Big Bang, the moment the universe formed 13.8 billion years ago.

Webb has infrared vision, so it can see light that is invisible to the Hubble. It can see through clouds of space dust. The shorter visible and ultraviolet light given off by the first stars and galaxies have been stretched as the universe grows. So, Webb will see them in their infrared form, which is stretched out and giving off heat.

Webb's detectors need to run at minus 240 degrees Celsius. To stay this cold, Webb carries an "umbrella" the size of a tennis court. Between each of the sunshield's five layers is a hole so heat can escape out the sides.

To see the universe's first stars, Webb needs the largest mirror ever launched for astronomy.

The Webb mirror is more than 6.5 meters. Hubble's is 2.4 meters across. However, Webb's mirror is lighter because it is made of beryllium, a strong but lightweight metal.

The Hubble and Webb do have things in common: Production of both were years late and overbudget.

NASA's cost for Hubble from its 1970s development until now is about $16 billion, adjusted for inflation. That does not include all the shuttle flights for launch and repairs.

Webb's price tag is an estimated $10 billion. That includes the first five years of operation. The European Space Agency is paying for the launch costs.

The Associated Press Health and Science Department receives support from the Howard Hughes Medical Institute's Department of Science Education. The AP is solely responsible for all content.

tropical – adj. of or occurring in the tropics

astronomy – n. the scientific study of stars, planets, and other objects in outer space : astronomer – n. a person who is a specialist in astronomy

galaxy – n. any of the very large groups of stars and associated matter that are found throughout the universe

vision – n. the act or power of seeing

ultraviolet – adj. used to describe rays of light that cannot be seen and that are slightly shorter than the rays of violet light

detector – n. a device that can tell if a substance or object is present