Update Required To play the media you will need to either update your browser to a recent version or update your Flash plugin.
By Pete Musto
31 August, 2016


Explorers have found a ship that is over 200 years old at the bottom Lake Ontario.

This is the second-oldest, confirmed shipwreck in the Great Lakes area between the U.S. and Canada, the explorers said.

The team of three underwater explorers that found the ship is from the western part of the U.S. state of New York. The wreck was in the deep waters of Lake Ontario near the town of Oswego in central New York. 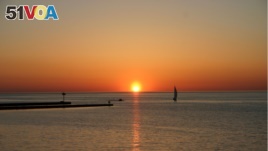 FILE - A sunset is shown on Lake Ontario in Niagara County.An American-built, Canadian-owned sloop that sank in Lake Ontario more than 200 years ago has been found by a team of underwater explorers.

Team member Jim Kennard said that pictures taken using an unmanned vehicle identified the ship as the Washington. The Washington sank in 1803.

The Washington was built on Lake Erie in the U.S. state of Pennsylvania in 1798. The ship was used to transport people and goods between, New York, Pennsylvania and the Canadian province of Ontario. Canadian merchants then bought the ship, took it out of the water, and transported it by land to Lake Ontario in 1802.

The 16 meter-long ship was loaded with goods from India when it left Kingston, Ontario on November 6, 1803. It was sailing to Niagara, Ontario when it was caught in a fierce storm and sank.

At least three crew members and two merchants died when the ship sank. Kennard said that records showed some of the goods and pieces of the ship were found the next day on a shore near Oswego.

The Washington is the oldest commercial ship wreck found in the Great Lakes, he added. It was also the only ship known to have sailed on both Lake Erie and Lake Ontario.

"This one is very special," Kennard said. "We don't get too many like this." Kennard and team members Roger Pawlowski and Roland ‘Chip' Stevens have found several shipwrecks in Lake Ontario and other waterways.

Carrie Sowden is an official at the National Museum of the Great Lakes in Toledo, Ohio. The museum helps pay for Kennard and his team to explore the area. Sowden said ships with only one mast, called sloops, were replaced by ships with two or three masts, called schooners, in the early 1800s. Schooners were much easier to sail.

There are no known drawings of the Washington, she added. This means the discovery will help historian of the seas learn more about the ships that sailed on the Great Lakes between the American Revolution and the War of 1812.

"Every shipwreck offers something different that adds to our knowledge base," Sowden said.

The oldest ship found in the Great Lakes is a British warship called the HMS Ontario. The HMS Ontario sank in Lake Ontario in 1780.

Kennard and another explorer found it in 2008.

Chris Carola reported on this story for the AP news service. Pete Musto adapted it for VOA Learning English. Mario Ritter was the editor.

We want to hear from you. Have explorers found any interesting discoveries in your country recently? What is the oldest thing explorers have discovered in your country? Write to us in the Comments Section or on 51VOA.COM.

merchant(s) – n. someone who buys and sells goods especially in large amounts

mast – n. a long pole that supports the sails of a boat or ship