Extreme Cold Affecting Many Areas Across US

Update Required To play the media you will need to either update your browser to a recent version or update your Flash plugin.
By VOA
03 January, 2018


Extremely cold weather is a problem in many parts of the United States.

The Associated Press reported Wednesday that record-setting temperatures have been blamed for at least 12 deaths in recent weeks.

Some forecasters say the worst weather is yet to come.

On Tuesday, the U.S. National Weather Service announced wind chill advisories and freeze warnings for 40 of the 50 states.

The weather service predicted a "period of much-below-normal temperatures and dangerously cold wind chills to the central and eastern U.S. over the next week." 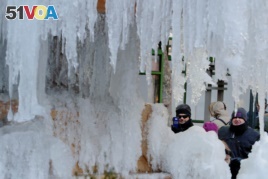 Air temperatures fell to -13 Celsius near Cullman, Alabama, which usually has a mild winter. In the port of Mobile, Alabama, temperatures reached as low as -7 Celsius.

On Wednesday, a winter storm dropped snow, sleet and freezing rain from northern Florida up the Southeast coast. Some cities reported snowfall for the first time in over 20 years. Cars spun out of control on icy roads from Texas to Georgia.

Hospitals across the country are reporting an increase in emergency room visits for hypothermia and other conditions linked to extreme cold.

At Niagara Falls, people took photographs of the Horseshoe Falls, where flowing water had turned to ice.

Frozen sharks were washing up along the coast south of Boston, Massachusetts, the Atlantic White Shark Conservancy reported.

Forecasters warned that weather conditions could worsen, especially in the Northeast.

A winter storm warning extended from the Florida panhandle all the way up the Atlantic coast. Coastal flooding, downed trees and power lines were possible along the East Coast.

forecasters – n. a person who predicts (something, such as weather) after looking at the information that is available

hypothermia – n. a condition in which the temperature of your body is very low

park – n. an area that is designed for a specified use such as swimming, walking or nature

ferry – n. a boat that moves people across a small body of water

chill – n. a feeling of being extremely cold