Update Required To play the media you will need to either update your browser to a recent version or update your Flash plugin.
By Ashley Thompson
05 April 2020


It took Viktery Zimmerman only two days to find ways to connect with friends and family. She and her husband are stuck inside their home in Chicago, Illinois, as ordered by the state's stay-at-home measure.

There are the FaceTime video calls. There is the movie night with friends who are also stuck at home. There are plans for a game night. Viktery will do whatever is necessary to keep her from, as she puts it, "spinning in circles." 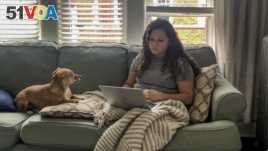 In this March 27, 2020 photo, Vicktery Zimmerman works from her home in Chicago during the order to shelter in place. A self-proclaimed extrovert, Zimmerman has come up with workarounds like video calls to deal with social distancing. (Justin Zimmerman via AP)

She describes herself as an extrovert -- someone who likes being with and talking to other people. Her husband, Justin Zimmerman, is an introvert. In other words, he is quieter and needs more alone time than his wife.

He laughs at their differences in personalities. "Now it's become a thing where people are FaceTiming us all day, every day to say ‘Hi,'" he said. "I'm like, ‘You really don't have to.'"

Most Americans and many other people around the world are following stay-at-home orders designed to stop the spread of the new coronavirus. The crisis has led to many changes — including how and when people have social exchanges.

The changes to daily life have affected extroverts and introverts in different ways. They may come as a release of pressure for some introverts who no longer must explain why they do not want to take part in social activities. Extroverts, however, are left seeking out social connection in a world where that is suddenly limited.

Eric Bellmore considers himself an extrovert. He found himself shouting a hello to someone he did not know when he went for a run near his home in the state of Michigan. He just wanted a chance to speak with someone.

Bellmore said, "It's mind-boggling to grasp how much I need to be around other folk."

But, social distancing has been a more pleasant change for David Choi, a Los Angeles musician who describes himself as introverted. His profession often requires him to be networking – attending social events and meeting new people in the hopes of getting professional help.

The order restricting movement, he says, "gives you an excuse to stay home, which is what you want to do in the first place."

The world generally has been a place where extroverts are rewarded and introverts are judged, says Lisa Kaenzig. She is a top administrator at William Smith College in New York and very much an extrovert. But she has studied introverted learners for years.

Kaenzig says everyone might share in the fear and worry over the virus. But she says most of the introverts she has spoken to report that the limited social activity has been good for them.

"All of the things that make the world harder for them as introverts, the world is better for them right now. They're adapting much more quickly," she says.

Some introverts, however, may struggle with the idea that staying home is an issue of government demand. It is no longer possible to visit a restaurant or coffee place when they do want to connect with people.

Jackie Aina of Buffalo, New York, would often do just that when she was working from home.

"Now that control is being taken away," she says. "That's very different than choosing when and how you get to stay at home."

spin - v. to turn or cause someone or something to turn around repeatedly

personality - n. the set of emotional qualities, ways of behaving, etc., that makes a person different from other people

mind-boggling - adj. having a very powerful or overwhelming effect on the mind

grasp - v. to understand (something that is complicated or difficult)

reward - v. to give money or another kind of payment to (someone or something) for something good that has been done