Update Required To play the media you will need to either update your browser to a recent version or update your Flash plugin.
By Jim Dresbach
11 November, 2015


ExxonMobil is facing questions about what it told the public and investors about the risk of climate change.

The state of New York is investigating the oil company. The case focuses on whether ExxonMobil failed to warn investors about climate change and its impact on the oil business.

An ExxonMobil spokesman rejected the charges that the company tried to change research. The oil company said it stands by its 40 years of climate research. 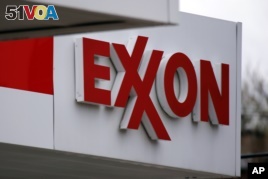 New York sent a subpoena to ExxonMobil that demands financial records, emails and other documents. The oil company is deciding how to respond, said a public affairs executive with ExxonMobil.

Should oil companies be responsible for their role in climate change? Let us know in the Comments section or on 51VOA.COM.

focus - v. to direct one's attention on something

subpoena – n. a written order that commands someone to appear in court to give evidence

respond – v. to say or write something in answer to something