‘Eye in the Sky' Looks at Drone Strikes

Update Required To play the media you will need to either update your browser to a recent version or update your Flash plugin.
By VOA
08 April, 2016


Should the life of one innocent be sacrificed to save many others? That is the thematic question of director Gavin Hood's new film. "Eye in the Sky."

The movie is set in 2015. The United States and Britain are set to carry out a joint drone attack. They aim to kill a terrorist before he carries out a suicide bombing that could kill many people.

The thriller follows the drone operation which is about to strike a terrorist cell in Nairobi, Kenya. Officials are faced with moral questions as an innocent civilian enters the area where the missile is expected to strike.

Military officials in different parts of the world watch video of the target area provided by a tiny spy drone. They observe as a Briton-led group of terrorists prepares for a major suicide attack in Nairobi. The officials consider moving from their capture-only drone operation to a deadly one. 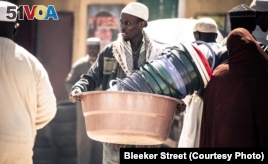 The military and political debate over the decision delays action and that worries Helen Mirren's character, Colonel Katherine Powell. She is the leader of the joint military operation.

Time is running out.

The situation becomes even more complex after a child enters the drone target area.

Colonel Powell watches from London. She is ready to kill the terrorists. Her goal, as she sees it is to prevent a possible terrorist massacre. But others consider the political and diplomatic results of such an attack. One character describes the weight of the military decision simple. He says "If they kill 80 people, we win the propaganda war. If we kill one child, they do."

Gavin Hood says "Eye in the Sky" shows that there are no easy answers when it comes to drone warfare. "Will you sacrifice, will you definitely take one innocent life in order to possibly prevent the loss of 80 lives? What if there were five innocent lives close to this kill zone? What if the estimate of the loss of life (by the terrorists) was only 20? What if it was 2,000?" he asks.

The filmmaker hopes "Eye in the Sky" will generate discussions among his audiences on the human, political and strategic costs of drone warfare. "If you are not there and you are only attacking from the sky, how [do you expect] the local population to respond?" he asks.

Hood says his film is imaginary but the story was fully researched. "We spoke to people from all areas. From the military lawyers, who were involved in this, to drone pilots, to military intelligence officers. He said a real drone pilot was permanently on set to make sure that everything was correct.

Along with Helen Mirren, the late actor Alan Rickman plays the sharp but cool under fire Lt. General Benson. Aaron Paul is the emotional drone pilot Steve Watts. Together they successfully communicate the message of "Eye in the Sky" -- that as exact as drone missiles might be, they are still guided by often conflicted human beings.

In Gavin Hood's words, "there are military people who seriously question the use of the drone and there are people within the military who think it is the best thing that ever happened."

Gavin Hood says the debates we see dramatized in "Eye in the Sky" are very much like the debates happening in real war rooms, and elsewhere in the real world.

We want to hear from you. Write to us in the Comments Section and visit us on Facebook.

thriller – n. a novel, movie or theatrical production that is exciting; a story full of exciting action, mystery or suspense

cell – n. a small group of people who work together secretly as part of a larger organization or group

massacre – n. the violent killing of many people

zone – n. an area that is different from other areas