Update Required To play the media you will need to either update your browser to a recent version or update your Flash plugin.
By Anna Matteo
22 October, 2018

Some people are great at remembering faces. Once they meet you, they never forget how you look. They might say things like, "I never forget a face." or "I'm really good with faces."

For some people, remembering a face can be difficult. You may have to meet them several times before they can recognize you.

For others, remembering a face is simply impossible. Such people have a condition of the brain called "face blindness." Its actual name is developmental prosopagnosia, or DP for short.

Many people who have DP show no clear signs.

If you met her, you probably would not know that she suffered brain damage as a child. There would be no sign of it until you meet her a second time. She would not remember how you looked.

Reid has mostly recovered from her injuries. But now, she suffers from face blindness.

Face blindness was once thought to be rare. But recent studies have shown that it might be more common than experts had thought.

The latest study on face blindness come from the Prosopagnosia Research Centers at Dartmouth College in the United States. The National Science Foundation provided financing for that research.

Bradley Duchaine is a professor of psychological and brain sciences at Dartmouth College. He worked closely on this study with Guo Jiahui, also of Dartmouth.

Duchaine says that the research showed "neural abnormalities in many people with DP are more widespread than previous studies have suggested."

The researchers studied how people recognize and process faces. They compared 22 patients with DP to 25 other people. The researchers showed all the subjects videos of faces, bodies, physical objects and other images.

Then they used functional magnetic resonance imaging, or fMRI, to measure activity in each person's brain. An fMRI can identify chemical and other changes resulting from blood flow.

One test involved famous faces. The researchers wanted to find out if the subjects could recognize pictures of famous people. 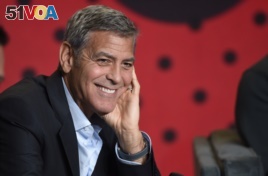 Most people can recognize the very famous face of George Clooney. Some people with severe DP can't.

The woman we spoke about earlier, Dacia Reid, took part in the study. When shown famous faces, she drew a blank with actor George Clooney.

However, she could identify actor John Travolta because of one specific feature.

"My main interest is trying to understand the organization of the normal brain, and we use these brains that have suffered brain damage to try to make inferences about the way the normal brain operates."

For example, Duchanie says his team wanted to see if the brain recognized people and things in the same way. So, the researchers tested how well people with face blindness could recognize common objects, such as cars.

They found that people with DP may not have been able to remember faces, but they could recognize objects, scenes and bodies.

"And so imagine that we find somebody who suffered brain damage. And they can't recognize faces any longer, but they still recognize cars in a parking lot and they can recognize scenes and things like that."

He says that suggests that faces are processed differently in the brain.

Duchaine says this study on face blindness will not directly lead to any treatments. However, he said it could lead to a deeper understanding of how we all remember the world around us.

"We hope that by really developing and understanding face processing itself -- that will provide us with a model for understanding how other parts of the brain work."

photograph – n. a picture made by a camera

neural – adj. of, relating to, or affecting a nerve or the nervous system

abnormality – n. something that is not usual, expected, or normal

previous – adj. going before in time or order

draw a blank – expression to fail to gain a desired object (such as information sought) also : to be unable to think of something

inference – n. the act or process of reaching a conclusion about something from known facts or evidence