Update Required To play the media you will need to either update your browser to a recent version or update your Flash plugin.
By VOA
04 June, 2017


In early May, Facebook said it was hiring an additional 3,000 people to identify and remove violent and hateful content.

The announcement came after several people posted videos of murders and suicides that stayed on Facebook for hours.

In a Facebook post, CEO and co-founder Mark Zuckerberg called the videos "heartbreaking." He said the new employees will work with about 4,500 existing ones to find and remove such content as quickly as possible.

Britain's Guardian newspaper recently reported on Facebook's policies for the removal of certain kinds of content. The newspaper said it gained possession of private training documents and other materials used as guidelines for Facebook employees.

The Guardian report says Facebook policy permits some posts containing violent language, and not others. This reportedly can depend on whether the content relates to what Facebook considers protected or non-protected people or groups. 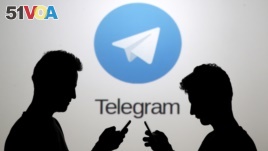 In this file photo, two men pose with smartphones in front of a screen showing the Telegram logo in this picture illustration taken in Zenica, Bosnia and Herzegovina, Nov. 18, 2015.

The guidelines also reportedly permit photos of animal abuse to be posted, if the most extreme images are marked as "disturbing."

"This requires a lot of thought into detailed and often difficult questions, and getting it right is something we take very seriously," she said.

Emma Llanso is director of the Free Expression Project at the not-for-profit Center for Democracy & Technology. She says the Facebook documents show how difficult it can be for social media companies to balance free expression with content controls.

"I think it can help more people understand what a challenging task we all face in figuring out what are the sorts of speech and the kinds of content that we all find acceptable on our social media services..."

She said one way for social media companies to balance these issues is to provide better filtering tools for users to block content themselves.

"You have got to look more to the ability for people to create their own filters or blacklists, or categories of things that they just don't want to see. That's the sort of response that really puts the power in the hand of the individual user..."

The recent suicide bombing in Manchester, England led some officials to repeat calls for social media companies to do more to stop terrorist activity.

Thomas Zeitzoff is a professor at American University in Washington, D.C. He studies the effects of social media on conflicts. He says one problem with trying to limit terrorist activities on Facebook and Twitter is that groups usually find ways around the restrictions.

"What you've seen the groups do is they've migrated to Telegram, WhatsApp and other kinds of encrypted social media applications that make it much harder for governments to track."

Even as some governments call for stricter limits on social media, they also use the services themselves to gather information on terror groups and to help with investigations.

Zeitzoff says social media also publicizes attacks globally and can give terrorists a way to get their message out to the whole world.

"There can be this concern that it broadens and amplifies the message and terrorizes people more. But too, it also can inspire people, because some people want to be famous or they see some kind of identification with the attacker that carried it out."

We want to hear from you. What are your thoughts on social media companies restricting the content of users? Write to us in the Comments section, and visit 51VOA.COM.

facetious – v. speech that is meant to be funny but that is usually considered annoying or silly

bully - v. intentionally bother or frighten someone who is smaller, weaker, etc.

sadistic – adj. enjoyment that someone else is hurt or feels pain

distress – n. suffering or pain affecting the body or mind

disturbing – adj. something that worries or upsets you

challenging – adj. difficult to do

task – n. piece of work or job for someone to do

figuring out – n. finding out how to understand something

filter - v. software tool to prevent certain types of content from being received or seen

blacklist – n. list of people or things to be avoided

category – n. group of things related to each other

response – n. answer or reaction to something

access – n. way of getting at or near someone or something

encrypted – adj. information that is electronically changed from one form to another, especially to hide its meaning