Update Required To play the media you will need to either update your browser to a recent version or update your Flash plugin.
By Carolyn Nicander Mohr
08 March, 2017

But what if the story was false, or fake? Through a simple mistake, you might be spreading information that is untrue.

Facebook has started a program to battle the spread of fake news. The program alerts Facebook users when independent fact checkers have disputed the truth of a news story. Facebook also has made it easier for its users to dispute a news story.

A video from Facebook introduces the new update Facebook is launching for noting fake news. The video was released in December, when Facebook first announced it was testing this ‘fake news' program

The program for dealing with fake news has four parts. Each one is supposed to help users identify when a shared news report is not true.

Facebook has started to work with independent fact-checking organizations to find out whether a disputed story is true or false. These groups have promised to verify news stories using the Poynter Organization International Fact Checking Network ethical guidelines.

When these fact checkers dispute the truth of a story, Facebook will not block the story from News Feeds. Instead, the site will flag the story as under dispute.

A link to an explanation about why a story is disputed will be included. Click on the three dots [...] next to the story to find the link. 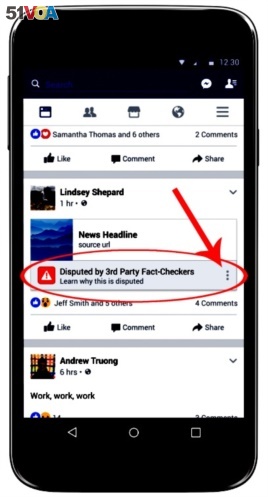 "To see why a news story was marked as disputed on Facebook:

You can share a story that has been flagged as disputed, but you will get a warning about it from Facebook.

Easier Reporting That a Story on Facebook Is Fake

Facebook is making it easier for users to report a story as fake. Here are the site's instructions on how to do that.

You can also send a message to your friend who posted the false story, letting him or her know that the story has been disputed. Or, you can block that friend.

The update includes software that Facebook uses to identify stories that may be in dispute. If many people read a story but few share it, Facebook may tag it for verification by the independent fact checkers.

Sometimes spammers will spread false stories on Facebook to try to get readers to click on advertisements. After a story has been flagged as disputed by Facebook, that article can no longer be promoted in News Feeds or in Facebook ads.

What else you need to know

The process for marking a news story as disputed takes a while. Do not necessarily believe a story on Facebook is true just because it is not flagged as disputed. That flag may be coming.

This update to Facebook is coming into use slowly, so you may not see flagged stories in your News Feed immediately.

Have you seen stories on Facebook that have been flagged as being disputed? Have you reported news stories you have seen in your News Feed as being false? Do you agree with Facebook's way of identifying fake news stories?

assume - v. to think that something is true or probably true without knowing that it is true

alert - v. to give (someone) important information about a possible problem, danger, etc. : to warn (someone)

verify - v. to prove, show, find out, or state that (something) is true or correct

flag - v. to mark (something, such as a page or section of a book) so that it can be easily seen or found

spammer - n. a person or organization who shares unwanted articles or emails with others

promote - v. to change the rank or position of (someone) to a higher or more important one