Update Required To play the media you will need to either update your browser to a recent version or update your Flash plugin.
By Anna Matteo
21 May 2021


When some people face difficulty, they look at their problem creatively. They consider a problem not as a barrier but as a chance to make something good.

And Americans have a saying for that: When life gives you lemons, make lemonade! In other words, just add sugar and water and a sour fruit can become a sweet drink.

Well, recently a family in New York decided to take on the pandemic "lemon." But instead of a popular summertime drink, the family cooked up a meal: lemon rosemary chicken. 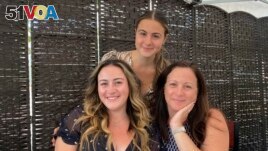 Traci Cangiano, seated right, with her daughters Daniella, left, and Kristina organized a Facebook group that traded homemade recipes during the pandemic. (Vinny Cangiano via AP)

Traci Cangiano and her daughters Daniella and Kristina launched the Facebook group Quarantine Kitchen in March 2020 when restaurants closed because of COVID-19. The family shared personal recipes on the group page and sought the same from members. The group grew into a lively, online community of tens of thousands of people.

Then, the Cangianos decided to reach out to the world in another way. The family collected the recipes from the Facebook group and created a cookbook, called In the Quarantine Kitchen. It is published and for sale on the web marketplace, Etsy.

The cookbook includes 120 recipes. All of the them were posted during the pandemic on the Quarantine Kitchen page.

The 250-page cookbook contains more than just recipes. It has family photos. Some people share their memories of family coming together for special meals. Others explore how food and meals can be designed to celebrate the lives of loved ones lost.

The first group of the books sold well and quickly. Now, In the Quarantine Kitchen is in its second printing.

"We started it as a way just to share our dinner with our family and friends. We didn't see in the beginning what it would become. We just thought it was something fun to do, something to distract us," said Daniella Cangiano.

The women are giving all profits from the book's sales to The Stephen Siller Tunnel to Towers Foundation. That organization honors firefighter Stephen Siller and all those in public emergency services.

Other dishes were made up during the pandemic. One such dish was a version of tres leches, or three milks, cake. The recipe turns it into frozen treats because ice cream shops were closed.

On the Quarantine Kitchen page, families from around the world sent messages of thanks for the meal ideas and sense of community. One woman wrote that her daughter had cancer and they checked the site together every day to see what people were cooking.

Traci said, "I would never think in a million years a Facebook page would affect people's lives like that."

Online, the community has stayed active. New postings go up every few hours. Traci added, "We could probably do five more books. I kid you not."

Now, more than a year later, the Facebook group has more than 44,000 members. The top posters by country are the United States, Canada, the Philippines, and the United Kingdom. Next come Portugal, Vietnam, India, Cambodia, and South Africa.

Traci Cangiano told the AP that the cookbook grew out of that Facebook community and is a collection of the stories and recipes shared there. She said the publication is like a memory book for the year 2020.

"I hope we never see anything like 2020 again," added Traci, "but this book will serve as a nice reminder."

The pandemic has unsettled life for many people around the world, including this Staten Island family.

Kristina is in her last year of high school and the Quarantine Kitchen helps to ease the pressure she feels. "There's a lot going on, but it's definitely helped," she said.

Her older sister, Daniella, graduated from St. John's University and loves to bake. She shares her creations with the Facebook group and likes to hear what others think of them.

"That kind of kept me going. I knew I had something to look forward to, even though things were kind of crazy," she said. "I was able to still bake and still enjoy that. And sharing that love of baking with others online," Daniella said, "was so much fun."

Mark Kennedy wrote this story for the Associated Press. Anna Matteo adapted it for VOA Learning English. Caty Weaver was the editor.

sour – n. having an acid taste that is like the taste of a lemon

distract – v. to take (attention) away from someone or something

crazy – adj. unable to think in a clear or sensible way : wild and uncontrolled