Update Required To play the media you will need to either update your browser to a recent version or update your Flash plugin.
By Hai Do
20 March, 2018


Facebook "likes" can tell a lot about a person.

In a 2013 study, researchers showed they could use Facebook "likes" to correctly predict personal information, including a user's sexual identity and ethnicity.

The researchers could also predict a person's age, intelligence, and opinions about religion and politics. They could identify whether someone is happy or used addictive substances. They could even predict whether an individual's parents would stay together until the person turned 21 years old.

The study was based on information from 58,000 volunteers who provided "likes" to Facebook, the American social media company. The findings were published in Proceedings of the National Academy of Sciences.

The researchers used computer programs to look for hard-to-establish patterns, such as a link between a love for curly fries and higher intelligence.

The 2013 study found that Facebook users who rated high on Openness often liked Hello Kitty brand products. They also were more likely to be of African-American ancestry and support Democratic Party values.

Many businesses urge people to log on to their websites with Facebook or other social media accounts. This, in turn, provides companies with a complete picture of the user's birthday, list of friends, schools attended and other personal information.

Marketers often use Facebook "likes" and other digital records to sell products and improve services.

The researchers warned about the possible misuse of digital records and personal information. They said marketers can collect information about large numbers of people without asking for their approval and without them noticing. They said companies, governmental agencies, or even one's Facebook friends could gather data that an individual may not have wanted to share. 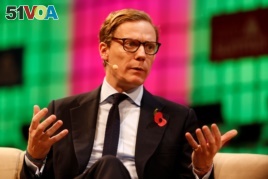 Last week, Facebook reported that a private company called Cambridge Analytica did just that with data from its social media website.

Facebook said Cambridge Analytica collected private information, including Facebook "likes," from more than 50 million Facebook users. It said the company got the information from 270,000 people who downloaded a software program described as a personality test. Those individuals agreed to share personal information for a study.

A researcher also took the information of all their Facebook friends, a move that was permitted under Facebook's rules until 2015. The researcher then sold the information to Cambridge Analytica, which used the data during the 2016 election campaign in the United States. The company worked for then candidate Donald Trump. However, a Trump campaign official said the campaign used Republican data sources, not Cambridge Analytica, for voter information.

Facebook suspended Cambridge Analytica for violating its rule. And it was considering legal action against the company.

Those measures might not be enough to satisfy U.S. and British officials.

Britain's Information Commissioner Elizabeth Denham said she is seeking permission to search Cambridge Analytica's London headquarters. She wanted to see whether Facebook did enough to protect users' personal information about themselves and their friends.

Several U.S. lawmakers want Facebook chief Mark Zuckerberg to speak to Congress about the use of its users' information.

Hai Do wrote this story for Learning English based on information from National Academy of Sciences study. George Grow was the editor.

addictive - adj. causing addiction; very enjoyable in a way that makes you want to do something again

pattern - n. something that happens in a regular and repeated way

curly fries - n. deep-fried potatoes cut into the shape of a spiral

log on - v. to establish communication usually over a network with a computer

account - n. an arrangement in which a person uses internet or service of a particular company

source - n. something that provides what is wanted