Update Required To play the media you will need to either update your browser to a recent version or update your Flash plugin.
By Bryan Lynn
25 April, 2018


Facebook published detailed guidelines Tuesday for what users can and cannot post on the social media service.

Earlier this month, lawmakers called on Facebook chief Mark Zuckerberg to appear in Congress. They demanded that his company take more steps to protect the privacy of its users. Some even raised the possibility of regulating the social media service.

Most of the newly-announced guidelines - which Facebook calls "Community Standards" – have already been in place. But it is the first time Facebook has publicly shared complete and detailed information about all its restrictions on user content.

In some cases, Facebook employees also contact police or other officials to investigate dangerous situations or possible crimes.

The guidelines for posting content cover many areas. These include hate speech, violent threats or incitement of violence, self-harm and human trafficking. 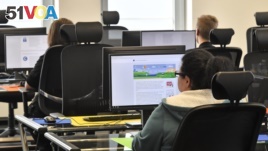 Monika Bickert is Head of Global Policy Management at Facebook. She told reporters that the company felt it was important to be more open about its operations and totally clear about its user rules.

"You should, when you come to Facebook, understand where we draw these lines and what's OK and what's not OK," Bickert said. She added that the guidelines themselves are always being reexamined and the latest changes are sent to employees weekly.

The guidelines demonstrate how complex and difficult decisions on restricting content can be. For example, Bickert said there are "community standards" that differ widely in nations across the world.

Another complex issue is how moderators decide how and when expressions of ideas and opinions violate policy.

For example, the Facebook guidelines permit a user to share another person's hate speech. But only if it is done "for the purpose of raising awareness or educating others." Users sharing such content must clearly show such purpose or moderators will remove the content.

Facebook says comments concerning violence must also be carefully examined in an effort to prevent real threats. The guidelines say that many times, people express their disagreement by threatening or calling for violence in "non-serious ways."

The moderators have to consider "the language, context and details" of posts in order to separate non-serious statements from threatening statements. Facebook says moderators call law enforcement when they believe there is a real risk of physical harm.

In addition to human moderators, Facebook also uses artificial intelligence or AI in an effort to find content violations. Facebook says the machines can help identify some pieces of banned material. But it says they are not equipped to judge the history and context related to it. It is also difficult for AI to correctly identify humor as well as a human can.

Facebook also announced that people will now be permitted to appeal decisions about the removal of individual photos, videos or posts. Until now, appeals could be launched only over the removal of whole accounts, groups or pages. The service is also beginning to provide exact reasons for content removal action.

The new guideline information was released one week after Facebook announced a major change to its privacy settings. The change makes it easier for people to approve or deny the company permission to use different kinds of user data.

Users now will be asked directly whether they want Facebook to block facial recognition, some kinds of targeted advertising or personal information. The European Union forced the enactment of those changes. Facebook said its new privacy protections went into effect in Europe last week, but will be extended to users worldwide in the future.

Bryan Lynn wrote this story for VOA Learning English, based on information from Facebook and reports from the Associated Press and Reuters. Caty Weaver was the editor.

awareness – n. feeling, experiencing or noticing of something

context – n. the situation something happens within and that can help explain it

artificial intelligence – n. the ability of a machine to reproduce human behavior