Update Required To play the media you will need to either update your browser to a recent version or update your Flash plugin.
By Bryan Lynn
06 December, 2017


For the first time, Facebook is opening its service to children under age 13.

The free service, called Messenger Kids, must be activated by the child's parents. Parents can then create a profile for the child as an extension of their own Facebook account. Parents must approve all requests before people can connect with the child. 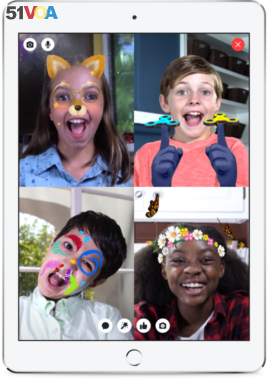 Children aged 6-12 are allowed to use Messenger Kids, which is currently only available for users in the United States. The app has so far only been released for Apple's iOS operating system, for use on iPads, iPhones and the iPod touch. More devices will be added in the future.

The app allows children to send photos, videos and text messages and make video calls. Colorful pictures, drawings and sounds can be added to messages.

Facebook says it created Messenger Kids to fill a need for a messaging app for children that gives parents full control. The company said it believes the new app will provide a "fun, safer solution" for children to communicate with family and friends.

Facebook said it developed the app after speaking with thousands of parents, major parental groups and child development experts.

Children and parents can block any contacts at any time. Children can report bullying or any unwanted communication in the app. When a child makes a report, the parents are contacted as well. Messages do not disappear and cannot be hidden by children.

The company also said it would not automatically move users to the regular Messenger app or Facebook service after they turn 13.

Some individuals and groups have expressed concerns about the new app and questioned Facebook's true intentions for opening the service up to young users.

James Steyer heads the not-for-profit group Common Sense, which seeks to promote safe technology and media for children. He says the idea of giving parents control over Messenger Kids is good.

But, he said it remains to be seen whether the app will continue to stay ad-free. He also wonders whether the parents of child users will receive ads based on the new service.

"Why should parents simply trust that Facebook is acting in the best interest of kids?" Steyer said in a statement. "We encourage Facebook to clarify their policies from the start so that it is perfectly clear what parents are signing up for." 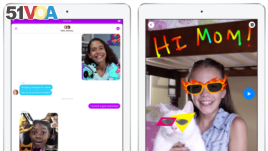 The Center for Digital Democracy praised Facebook for creating a "walled garden" approach to the new messenger service. The steps taken show that Facebook is taking "a leadership role in developing responsible corporate practices that could be the basis for industry-wide guidelines," the group said in a statement.

But the group added that it is still too early to fully understand the effects such technology will have on young people's psychological and social development. It urged parents, educators and company officials to closely monitor such services as they grow and to make changes as needed.

Bryan Lynn wrote this story for VOA Learning English, based on reports from Facebook, the Associated Press and Reuters. Hai Do was the editor.

We want to hear from you. Do you think Messenger Kids is a good idea? Write to us in the Comments section, and visit 51VOA.COM.

account – n. an arrangement in which a person uses the Internet or e-mail services of a particular company

bullying – n. the mistreatment or abuse of someone by a stronger or more powerful individual

encourage – v. tell or advise to do something

clarify – v. make something easier to understand through explanation