Update Required To play the media you will need to either update your browser to a recent version or update your Flash plugin.
By Ashley Thompson
26 October 2021


A former Facebook employee gave members of the United States Congress thousands of company documents. The documents show a company that recognizes the harm it is causing but does not want to find solutions.

Seventeen media organizations, including The Associated Press, worked together to be able to examine and report about the documents. A separate group of European news organizations gained access to the same set of documents. Members of both groups began publishing stories about the papers on October 25.

Facebook says it has good intentions – or aims and goals. But the documents show how the company has avoided or been slow to address the problems the social media company has often created.

Final responsibility for the company lies with company head Mark Zuckerberg. One former employee described him as having total control over the corporation. Facebook has around 3 billion users around the world.

Jennifer Grygiel is a communications professor with Syracuse University in New York. She has followed Facebook closely for years. She said, "Ultimately, it rests with Mark and whatever his prerogative is — and it has always been to grow, to increase his power and his reach."

Zuckerberg owns the majority of the company's voting shares and controls its board of directors. Critics say he surrounds himself with executives that do not question his ideas.

Facebook is struggling to attract younger users in the United States and Europe. A November 2020 Facebook document said that young people see Facebook as a "boring" network with "irrelevant content" that brings little value to them.

Facebook worked to expand its number of users outside the U.S. and Western Europe. But as it grew, the company failed to deal with or even predict the effects of signing up millions of new users. For example, the company did not hire extra workers or create new systems to identify and limit the spread of hate speech and misinformation.

And in places like Afghanistan and Myanmar, extremist language has spread easily and successfully. In Myanmar, hate speech on Facebook has been connected to crimes carried out against the country's Rohingya Muslim population. Facebook lacked workers who spoke the language to help limit such speech.

Facebook appears unwilling to prevent or even recognize the real-world damage its site can cause. Those harms include algorithms that push users into extremism, widespread misinformation, suicide among young people and more.

Efforts to help such problems often have been pushed to the side when solutions conflict with growth and profit.

The company continues to defend its choices instead of trying to fix problems. It denies that it has put money over people's safety.

Facebook said in a statement last week, "Yes, we're a business and we make profit, but the idea that we do so at the expense of people's safety or wellbeing misunderstands where our own commercial interests lie." 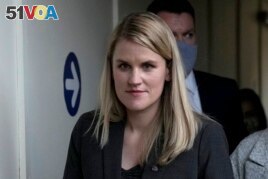 Facebook whistleblower Frances Haugen leaves after giving evidence to the joint committee for the Draft Online Safety Bill, as part of British government plans for social media regulation, at the Houses of Parliament, in London, Oct. 25, 2021.

Zhang said the company has become less willing to answer employee criticism and "in some cases cracks down upon it." Zhang was dismissed from Facebook in the fall of 2020.

One employee wrote on a company message board that many workers are "angry, while at the same time, feeling powerless ... about the current situation." The person wrote the message last year after Facebook decided to keep posts by former President Donald Trump that suggested Minneapolis protesters could be shot.

The Facebook Papers show how the company collected data on a number of problems on the social media site. For example, the company looked at how Facebook was used in the trafficking of workers in the Middle East. They also collected data on widespread vaccine misinformation that could have been easily slowed with small changes in how users see posts on their Facebook feed. But Facebook has done little to deal with the problems.

The company says it "does not conduct research and then ... ignore it if the findings are inconvenient for the company."

Frances Haugen is a former Facebook employee who spoke in front of the U.S. Senate this month. Through her lawyers, she has provided several news organizations access to the Facebook Papers.

Haugen told Congress that Facebook's products harm children, create division and weaken democracy. She said the company should declare "moral bankruptcy" if it is to move forward and solve its problems.

Right now that does not seem likely. The company still says that it is good for the world, even as it makes decisions meant to grow profit.

Barbara Ortutay reported this story for The Associated Press. Ashley Thompson was the editor.

prerogative — n. a right or privilege

irrelevant — adj. not important or relating to what is being discussed right now : not relevant

algorithm — n. a set of steps that are followed in order to solve a mathematical problem or to complete a computer process

profit — n. money that is made in a business, through investing, etc., after all the costs and expenses are paid : a financial gain

expense — n. the amount of money that is needed to pay for or buy something

crack down — phrasal v. a serious attempt to punish people for doing something that is not allowed : an increased effort to enforce a law or rule

posts — n. message on an online message board

bankruptcy — n. a condition of financial failure caused by not having the money that you need to pay your debts