Update Required To play the media you will need to either update your browser to a recent version or update your Flash plugin.
By VOA
07 August, 2015

Facebook representatives recently gathered in the city to celebrate the opening of the new office. They hope it will bring new users to the site and grow opportunities for both users and businesses.

In recent years, Facebook has made efforts to reach out to Africa. The company introduced a modified version of its app for lower-end phones. They also launched so-called "missed call ads." Users can click on the "missed call ads" to receive music, sports scores or messages from the advertiser at no cost. 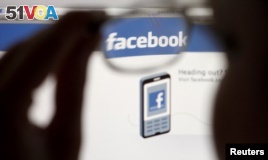 FILE - Facebook logo on a computer screen is seen through glasses held by a woman.

Facebook also has pushed for widespread and free Internet access. The company has partnered with mobile phone companies to offer free airtime for phone users who use Facebook and other selected sites. One project was recently started in the southern African nation of Angola.

Ebele Okobi is the head of public policy for Facebook in Johannesburg. She says the company's goals are not complex.

"We want to learn more about Africa, and we also want to serve consumers as well as businesses across the continent."

"You have NGOs who are using Facebook to bring transparency...to the electoral process...We have politicians...using it to connect directly with citizens."

But some African governments have not been as open to Facebook in the past. Egyptian officials temporarily blocked Facebook during the nation's social media-driven conflict in 2011. The nation of Mauritius blocked the site in 2007 after a fake account claimed to be from the prime minister.

Officials in Zimbabwe arrested a journalist and his brother in 2014, accusing them of running a disrespectful political Facebook page. But both men deny the charges.

Ebele Okobi says Facebook and all social media companies have to work with government officials.

Ms. Okobi adds that some users in Africa use the site to tell stories about the continent. The stories are not often told in traditional media. However, many African users are not very different from the Americans or Europeans. They use the site to share news, photos of family members and to connect with people.

VOA's Anita Powell reported this story from Johannesburg. Jonathan Evans adapted it for Learning English. Hai Do was the editor.

complex – adj. not easy to understand or explain; not simple

modify – v. to change some parts of (something) while not changing other parts