Update Required To play the media you will need to either update your browser to a recent version or update your Flash plugin.
By Bryan Lynn
23 February 2021


Facebook has removed a ban that prevented Australians from reading or sharing news stories on the social media service.

The action came after Facebook reached a deal with the Australian government to resolve a dispute over proposed legislation. The legislation seeks to make big technology companies pay news organizations for use of their content.

The dispute led Facebook last week to block Australians from reading or sharing news stories. But the dispute was settled after talks between Australia's Treasurer Josh Frydenberg and Facebook chief Mark Zuckerberg. 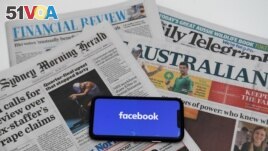 An illustration image shows a phone screen with the "Facebook" logo and Australian newspapers in Canberra, Australia, Feb. 18, 2021. (Reuters)

"Facebook has refriended Australia, and Australian news will be restored," Frydenberg told reporters in Canberra after the agreement was reached.

Frydenberg added that Australia had been a "proxy battle for the world" as other nations seek negotiations with technology companies on a range of issues involving news and content.

The Australian legislation was designed to limit the negotiating power of Facebook and Google in talks with Australian news providers. For example, it aims to prevent technology companies from making take-it-or-leave-it payment offers to news businesses for their content.

Frydenberg and Facebook confirmed that the two sides agreed to several amendments to the proposed legislation. One change would give technology companies one month's warning before they are officially covered under the law. That would give those involved more time to reach agreements before they are forced to enter enforceable arbitration agreements.

Facebook said it was pleased with the amendments, which need to be added to the legislation currently before the parliament.

William Easton heads Facebook's Australian and New Zealand area offices. He said the company is satisfied that the changes and guarantees under the deal meet its main concerns about the law.

"As a result of these changes, we can now work to further our investment in public interest journalism," he said.

Facebook's vice president for news partnerships, Campbell Brown, said the deal also permits the company to choose which publishers it will support, including small and local ones.

Some experts see the deal as a major victory in international efforts to make Facebook and Google pay for the news stories they use. And, governments around the world have closely watched the case.

But other experts see it differently. "Facebook has scored a big win," said independent British technology expert Richard Windsor, adding the compromises reached almost "guarantee that it will be business as usual from here on."

Google had threatened to remove its search abilities from Australia because of the proposed legislation. But the search engine decided not to do so after reaching compromises with several companies. Google says it currently has deals with more than 50 Australian titles and more than 500 publishers worldwide.

The Associated Press and Reuters reported this story. Bryan Lynn adapted the reports for Learning English. Caty Weaver was the editor.

content – n. the information presented in different forms or media or on the internet

proxy – n. a person or organization acting in behalf of another

arbitration – n. the process of solving an argument between two parties by helping them agree to an acceptable solution